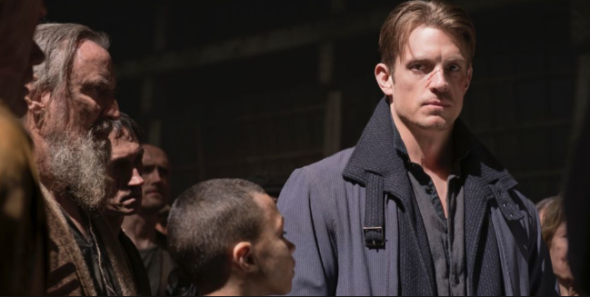 It looks like Netflix has a new hit on their hands. Deadline reports Altered Carbon earned 2.5 million viewers during its first week.

While Netflix doesn’t typically release ratings, Nielsen revealed Altered Carbon garnered 2.5 million viewers during its first seven days on the streaming service. However, the future of the sci-fi series is still up in the air.

Netflix has yet to renew Altered Carbon for a second season and creator Laeta Kalogridis has said she’s unsure how a follow-up would work.

What do you think? Have you seen Altered Carbon? Do you want a second season?

I liked it. Two episodes dragged. Otherwise, I really loved it. I’m a Joel Kinneman fan! And true and sci-fi fans know, sometimes you must digress to get the full story! And bring Kinneman back!!!!

I only gave it a 5 out of 10 points. The lead actor (“Captain Flagg” from “Suicide Squad”) doesn’t have the screen presence to carry a series. The main concept of immortality for the Rich through changing bodies is not that original–and the narrative for the characters kept going off into Nonsense Land. The saving grace–and probable reason for the viewership–was the full frontal nudity in several scenes.

Maybe stick with cartoons. The idea that Kinnaman doesn’t have presence is so absurd as to render anything stated afterwards as gibberish, yet somehow you managed to stretch yourself with the suggestion that viewers are tuning in for the elusive chance to view full-frontal nudity. On the internet.

I only gave it a 5 out of 10. The story concept was very intriguing, but the narrative kept going into Nonsense Land. The high ratings were probably based on the full-frontal nudity.

Yes! How that would work is simply to cast another actor. It’s entirely justified like Dr. Who. Or re-cast the same and change some stuff from the books. I actually liked Kinnaman.

Loved it! I’m sure you can come up with a season 2.

Altered Carbon – Is Great, Excellent – Nudity, Sex, Action, Storyline, Production Value, and reasonable FX – in the same vein as Blood Drive – it is so good for sure the p*ssy suits will cancel and replace with more brain dead garbage

You mean the same “p*ssy” suits that paid for the series, developed it, and put it on the air? At which point in that process did they become p*ssies?