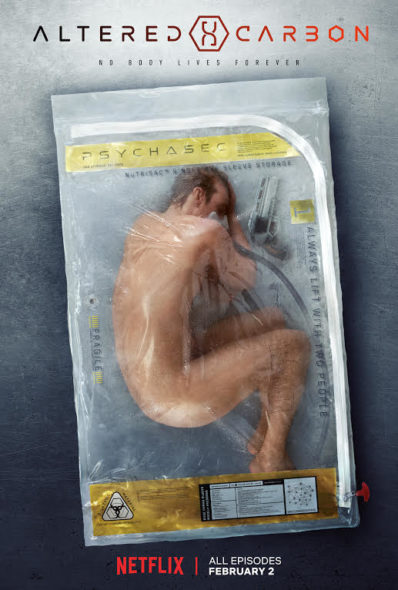 TV show description:
An adaptation of the Richard K. Morgan cyberpunk novel of the same name, the Altered Carbon TV show is a sci-fi drama from creator Laeta Kalogridis. The story unfolds in the 24th Century, when death is far from inevitable.

The thriller centers on hired gun and 22nd Century rebel Takeshi Kovacs (Joel Kinnaman). Returning to life centuries in the future, he is now compelled to track down a killer. Since it is still not entirely clear how the victims died, he decides to interview them, personally.

Because human beings can now download their consciousnesses to disk and spin them up into another body (i.e. “sleeve”), death is no longer a guarantee. The obscenely wealthy even have designers who can turn their sleeves into clones of their original selves.

Enter Laurens Bancroft (James Purefoy), who is well past being the richest man on Earth. He is among the wealthiest in all the “Settled Worlds.” For hundreds of years, he would procure a new sleeve when the old one no longer sufficed — at least until someone murdered him and destroyed his cortical stack.

On Earth, in brutal Bay City, Kovacs’ investigation seems to pose more questions than it answers. He doesn’t know whose body he is inhabiting or what happened to his long lost love. He needs to figure out why Lt. Kristin Ortega (Martha Higareda) seems so concerned with him, and whether or not he can trust former military officer Elliott (Ato Essandoh), or Poe (Chris Conner), an AI being at the Raven Hotel.

The privileged Methuselahs or “Meths” of the Aerium may hold the key to this mystery. Meanwhile, the “Grounders” continue their hard-scrabble existence, suffering economic oppression and forced servitude, in a reality where even life is for sale.

Series Finale:
Episode #18 — Broken Angels
With the whole planet in danger, Kovacs, Quell and the team search for Conrad Harlan in order to stop the destructive path of Angelfire.
First aired: February 27, 2020

What do you think? Do you like the Altered Carbon TV series? Should this TV show have been cancelled or renewed for a third season on Netflix?

I loved this show. I had to watch the first episode twice to understand it but after that I was hooked. Second season too. Shouldn’t have cancelled it or please bring it back.

The show should not be canceled. It’s a great show. Y’all keep cancelling the wrong shows for some reason. Rethink about what you’re doing to your fans.

Season 1 became a new standard in Sci-fi. Excellent writing, sets and acting. Season 2 seemed confused with Itself. Was looking forward to Season 3 Cleaning up a few things. Give it a chance!

I really enjoy watching this series, it’s refreshing to see a new concept in the SYFY world.
I was getting tired of see the same old storylines, or reruns of movies and TV shows.
I was beginning to think, no one has any good ideas?
Glad to see someone out there is taking public opinion serious.
We. As customers want to be entertained, we want variety, at least I do.
I don’t want to eat the same foods over and over, same with watching tv.
Great storylines, great actors, and great entertainment.

Great scifi show! It has a good concept and I look very much forward to more seasons!

This show is really out there, and I love it…the acting is amazing and the atmosphere is brings me back to the original Blade Runner with Harrison Ford…one of my favs. I’m so looking forward to a second season!

I think it deserves a second season. The acting was fantastic. Very gritty and also funny at times. Was enthralled with the story line and would love to see more.

Loved the program gritty and an ingenious plot with some fantastic acting, would love to see a second season