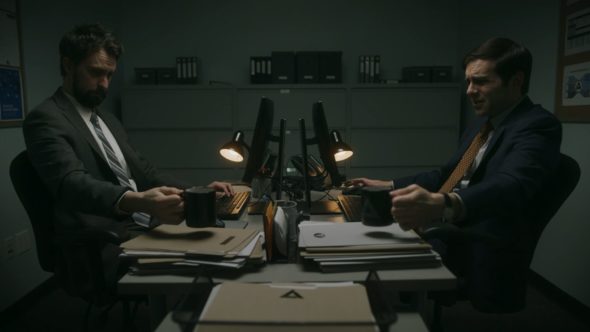 Is it time for Matt and Joke to quit? Has the Corporate TV show been cancelled or renewed for a fourth season on Comedy Central? The television vulture is watching all the latest cancellation and renewal news, so this page is the place to track the status of Corporate, season four. Bookmark it, or subscribe for the latest updates. Remember, the television vulture is watching your shows. Are you?

The third season of Corporate averaged a 0.14 rating in the 18-49 demographic and 252,000 viewers. Compared to season two, that’s up by 13% in the demo and up by 11% in viewership. Find out how Corporate stacks up against other Comedy Central TV shows.

We don’t have to wonder if Comedy Central will renew Corporate for season four. It’s already been announced that season three is the end. I’ll update this page with breaking developments. Subscribe for free alerts on Corporate cancellation or renewal news.

What do you think? Do you wish that the Corporate TV show had been renewed for a fourth season? Are you sorry that Comedy Central is ending this series, instead?

This show deserves to be continued or at the least be picked up by one of the platforms to re-air the first 3 seasons. Comedy central did not publicize it enough I feel. It will eventually achieve a cult following if giving the chance.

I cannot understand why Corporate is not going to be renewed for a fourth season. I love this show. It is a stand out show: it’s very different and witty, funny, and entertaining. To have a show so unique in a brilliant sort of a way, and not continue it is a shame. Corporate free me in immediately and became one of my favorite shows. I’m very disappointed that it’s ending, and I feel it is a waste to end such creativity and genious so quickly.