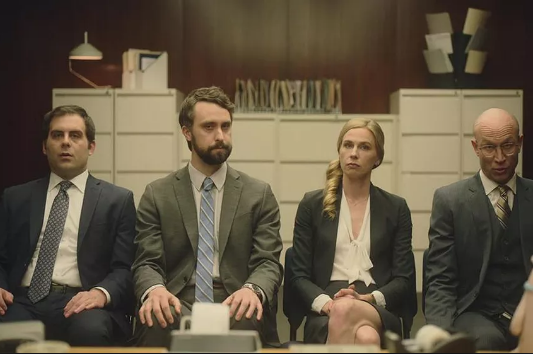 Despite Corporate’s low ratings over the past two seasons, the Comedy Central series has garnered critical acclaim. Overall, season two averaged a 0.13 rating in the 18-49 demo with 233,000 viewers.

The third and final season of Corporate is slated to debut in 2020.

NEW YORK, June 10, 2019 – Comedy Central, the #1 brand in comedy, today announced a greenlight for the third and final season of critically-acclaimed scripted series Corporate, set to premiere in 2020.

Created by Pat Bishop, Matt Ingebretson and Jake Weisman, Corporate is a dark, edgy look at life as a Junior-Executive-in-Training at your average, soulless multinational corporation. Matt and Jake (Ingebretson and Weisman) are at the mercy of a tyrannical CEO Christian DeVille (Lance Reddick) and his top lieutenants, sycophants John and Kate (Adam Lustick and Anne Dudek). As Matt and Jake navigate an ever-revolving series of disasters, their only ally is Hampton DeVille Human Resources rep Grace (Aparna Nancherla), who is beleaguered by both her job and her exhausting relationship with the very needy Matt and Jake.”

What do you think? Have you seen Corporate? Will you watch the third and final season?

Fantastic show and sad that it will end so soon but I am always OK to know in advance when a show is going to end.

I would like to see a spin off with a similar vein that has focus on the political system.

So happy for renewal , but so sad for final season ! Fantastic show !