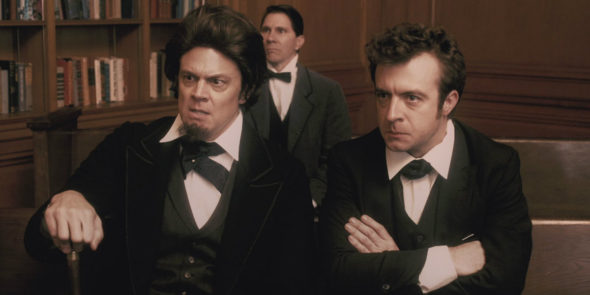 The comedy is back on Comedy Central. Recently, the network announced the premiere dates for new seasons of Drunk History and Corporate.

Celebrating its 6th season premiere, Drunk History devotes a full episode to an Are You Afraid Of The Dark parody around Mary Shelley’s creation of Frankenstein. The episode features A-list talent including, Evan Rachel Wood as Mary, Seth Rogen as Dr. Frankenstein, Elijah Wood as Percy Shelley, Jack McBrayer as Lord Byron and Will Ferrell as Frankenstein’s Monster. The episode is narrated by Rich Fulcher. Drunk History is created for television by Derek Waters and Jeremy Konner and is produced by Will Ferrell and Adam McKay’s Gary Sanchez Productions.

Season two of the critically-acclaimed Corporate will feature its own lineup of star-studded guests with Kyra Sedgwick, Elizabeth Perkins, Kristen Schaal, Sasheer Zamata, Baron Vaughn and Andy Richter. Corporate stars series’ creators/writers/executive producers Matt Ingebretson and Jake Weisman as two Junior Executives-in-Training at Hampton DeVille, a heartless, corporate hell-hole led by tyrannical CEO Christian DeVille (Lance Reddick) and his top lieutenants, sycophants John and Kate (Adam Lustick and Anne Dudek). As Matt and Jake navigate an ever-revolving series of disasters their only ally is Grace (Aparna Nancherla), a Hampton DeVille Human Resources rep who is beleaguered by both her job and her exhausting relationship with the very needy Matt and Jake. Corporate is directed by co-creator Pat Bishop. Follow Corporate on Twitter, Facebook and Instagram.

As previously announced, Comedy Central will debut the final season of Broad City on Thursday, January 24 at 10:00 p.m. ET/PT, followed by the series premiere of Comedy Central’s brand new, half-hour scripted series The Other Two.

Looking ahead, Comedy Central has a stacked year to offer fans with a programming slate that will feature new and returning series including: the premiere of scripted half-hour series South Side; sketch-comedy series Alternatino with Arturo Castro; stand-up series This Week at the Comedy Cellar and The New Negroes; new series from Jordan Klepper and Anthony Jeselnik; along with new seasons of The Daily Show with Trevor Noah, Tosh.0, The Jim Jefferies Show and much more.

Heading into 2019 Comedy Central is riding with momentum, finishing the recently-concluded fiscal year with ratings up +6% among Adults 18-49 – led by the highest-rated year among Women 18-49 (+13%) since 2014 – to earn its largest demo share in total day in three years. Comedy Central also registered massive multiplatform growth across the year with nearly 4.7 billion videos (8 billion minutes of content) streamed across digital and social platforms, year-over-year increases of +63% and +57%, respectively.

Comedy Central gives audiences access to a world of super funny, personally relatable, culturally relevant, and provocative comedy that tells the funny truths of life, every day and everywhere. From award-winning late-night, scripted and animated series to stand-up specials, short-form and sketch, Comedy Central has it all. A subsidiary of Viacom Inc., Comedy Central is available to more than 300 million households in over 150 countries across the globe.”

What do you think? Are you a fan of Corporate and/or Drunk History? Are you excited for the new seasons?