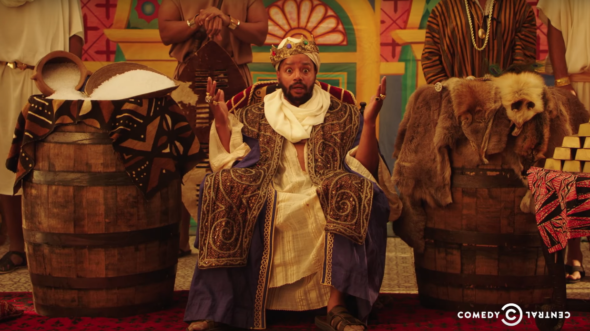 Drunk History was set to return for a seventh season after a renewal last summer, but now those plans have been cancelled. Production had started on the new season of the series just as COVID-19 shut down television and film productions in March.

Deadline reported that ViacomCBS’ Entertainment and Youth Group is behind the decision to cancel the Comedy Central series as the channel’s strategy for original programming is being reworked to focus on animated shows like South Park. Recently, the channel has greenlighted reboots of Beavis and Butt-Head and The Ren & Stimpy Show as well as a Daria spin-off titled Jodie. According to Deadline:

“We hear the high costs of producing Drunk History, which features elaborate period reenactments, also played a role in the decision not to proceed with another season.”

The series wrapped its sixth season last summer, and season six has been nominated for three Emmy nominations which include Outstanding Variety Sketch Series, Outstanding Costumes, and Production Design for a Reality/Variety/Competition series. Drunk History has won 17 Primetime Emmy nominations since it debuted.

What do you think? Are you a fan of this sketch comedy series? Are you sad that Drunk History will not return for a seventh season?

So, are you telling me that “Drunk History” and “Tosh.0” are being fired to make room for (as Deadline indicated) more seasons of “South Park”? No way! Comedy Central should be focusing on finding a good animated successor to “South Park”, and I’m not sure if reboots and revivals of past animated serieses are going to cut it. This is just another reason why ViacomCBS’s cable properties aren’t worth watching anymore (and frankly, they haven’t been worth watching for several years).