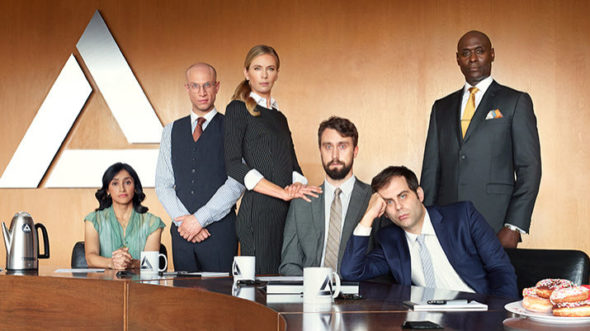 Comedy Central is heading to the office. Today, the network announced their new TV show Corporate will premiere in January.

NEW YORK, December 12, 2017 – Misery loves a company and that company is Hampton DeVille. From Pat Bishop, Matt Ingebretson, and Jake Weisman comes a dark, edgy workplace comedy unlike any other. Comedy Central’s newest scripted series, Corporate, takes you inside Hampton Deville – your average, soulless multi-national corporation – and follows the miserable lives of two downtrodden employees. Corporate premieres Wednesday, January 17 at 10:00 p.m. ET/PT with back-to-back episodes, as well as special bonus content. Beginning this Wednesday, TV subscribers can stream the first four episodes of the series exclusively on cc.com and the Comedy Central App or watch via their preferred TV provider’s video-on-demand (VOD) service.

In the premiere episode (“The Void”) Matt and Jake are given their first bit of power as Junior Executives-in-Training when they are tasked with firing an employee who sent out an insensitive tweet from Hampton DeVille’s Twitter account. With the internet outraged by the tweet and calling for a boycott of the company’s latest product on the day of launch, the guys have to literally talk the fired employee off the ledge with the only thing a depressed corporate drone has to live for: a slice of birthday cake.

Additional episodes available to stream and watch beginning this Wednesday include:

“The Powerpoint of Death” – Hampton DeVille aims to become a major player in the war industry, and needs everyone in the office to be on their best behavior. It doesn’t hurt that Human Resources has made reporting employees so easy. Can Matt and Jake use their unique talents to land the company a weapons contract?

“The Pain of Being Alive” – Everyone copes with the daily pains of the workplace in their own way. When Matt is caught taking a nap, he desperately tries to find a new outlet. Meanwhile Jake sacrifices his own health to advance his position at Hampton DeVille.

“Trademarq” – In an effort to grow their customer base, Hampton DeVille brings in the caustic street artist Trademarq. Jake is equal parts jealous and loathing when Trademarq becomes the office favorite and takes a liking to Matt.

Beginning this Wednesday, TV subscribers can stream the first four episodes of the series on cc.com and the Comedy Central App or watch via their preferred TV provider’s video-on-demand (VOD) service. During the series’ linear roll-out episodes will be made available the day of each new premiere. In addition, episodes will launch the day after each linear premiere on iTunes, Amazon Video, Google Play, VUDU, Verizon Flexview, Microsoft Movies & TV, Sony PlayStation, and Frontier Communications.

Matt Ingebretson is a stand-up comedian who was voted one of Comedy Central’s Comics to Watch in 2014. He hosts the weekly LA-based comedy show Good Heroin – which LA Weeklynamed one of the top 10 best comedy shows in LA. He also appeared on the third season of Adam Devine’sHouse Party. As a writer, Ingebretson has contributed to The Onion, McSweeney’s, Funny or Die, and The Soup.

Jake Weisman is a writer, comedian and actor who has garnered viral online and national attention as one of the best upcoming comedians in the country. Weisman has an extensive sketch background and has gained a notable fan-base and was named #1 on LA WEEKLY’stop comedy acts to watch in 2014. He was also named the #3 stand-up comic to watch in 2014 by Splitsider.

The ten-episode weekly scripted series is executive produced, created and written by Ingebretson, Weisman, and Bishop, who also directs. Jake Fogelnest also serves as an executive producer with Nate Young as co-executive producer. Adam Londy and Ian Friedman are the Executives in Charge of Production for Comedy Central.”

What do you think? Do you enjoy workplace comedies? Will you watch Corporate?