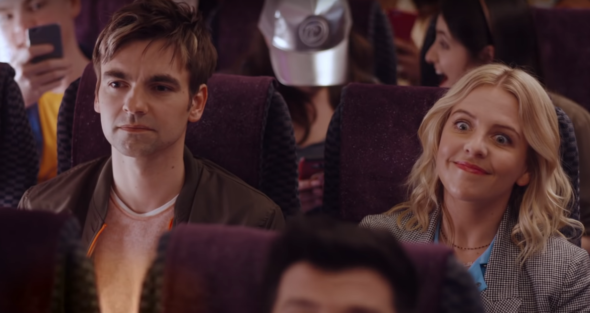 “We’re hot, we’re cool, and we’re killing it.” Comedy Central has just released a new trailer for their upcoming TV show, The Other Two.

The Other Two is created by, written by and executive produced by Chris Kelly and Sarah Schneider, who recently departed Saturday Night Live after serving as co-head writers during one of the series’ most memorable seasons. The series stars Drew Tarver (Bajillion Dollar Propertie$) as a 28-year-old actor struggling to get better auditions than “Man At Party Who Smells Fart,” and Heléne Yorke (Masters of Sex) as his 30-year-old sister, who is struggling in general. As the two work toward finding themselves, their lives are completely upended when their 13-year-old brother, ChaseDreams played by Case Walker, becomes incredibly famous overnight. The Other Two will also feature Molly Shannon, who plays the siblings’ fame-ready mother, and Ken Marino (Party Down), as ChaseDreams newly-hired manager.

Episodes of The Other Two will be available the day after premiere on the Comedy Central App and cc.com. In addition, episodes will launch the day after each linear premiere on iTunes, Amazon Prime Video, Google Play, Microsoft Movies & TV, VUDU, Sony PlayStation Video, and Verizon Flexview. For a more immersive look into the show watch our weekly after show, The Other Show, featuring conversations with the creators and cast. Fans can head to here or follow along on Facebook for exclusive video, behind-the-scenes moments and shareable content inspired by the show.

What do you think? Do you watch a lot of Comedy Central? Will you check out The Other Two?