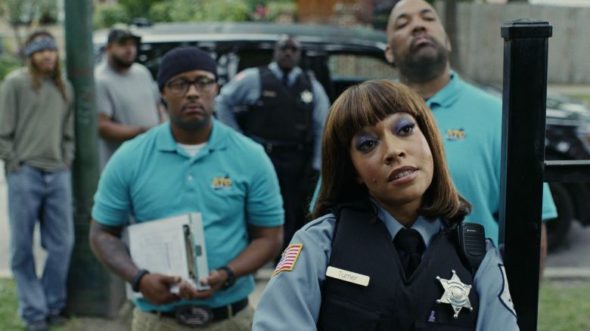 Comedy Central is returning to The Windy City. The network just announced they’ve renewed South Side for a second season.

Set in Chicago, the comedy series “follows two friends who just graduated community college … so now they’re ready to take over the world! But until they do they’re stuck at Rent-T-Own, a retail-rental crossroads where the South Side’s vast ensemble of characters come together.” The cast includes Sultan Salahuddin, Kareme Young, Chandra Russell, Lil Rel Howery, and Bashir Salahuddin.

Comedy Central has ordered 10 episodes for season two of South Side.

NEW YORK, August 28, 2019 – Comedy Central today ordered a 10-episode second season of hit series South Side, the aspirational, scripted comedy set in and around the working class neighborhood of Englewood on the South Side of Chicago.

Season one of South Side, currently airing Wednesday nights at 10:30 p.m. ET/PT on Comedy Central, is garnering universal praise from critics and holds a 100% Certified Fresh rating from Rotten Tomatoes.

“Our mission is to show the world the joy of Chicago,” said South Side executive producers Bashir Salahuddin, Diallo Riddle and Micahel Blieden. “Comedy Central has been a fantastic creative partner in this effort. They allow all the Chicagoans who make this show possible to create with zero compromises. We are blessed.”

“South Side is a truly unique and special show – one that is first and foremost incredibly funny, but also redefines perceptions of Chicago through storytelling and humor,” said Jonas Larsen and Sarah Babineau, Co-Heads of Original Content for Comedy Central. “Diallo, Bashir and Michael have created such an incredible comedic world with this show and we can’t wait to see what they have in store for season two.”

The show follows two friends who just graduated community college … so now they’re ready to take over the world! But until they do they’re stuck at Rent-T-Own, a retail-rental crossroads where the South Side’s vast ensemble of characters come together. Despite the obstacles of inner-city life, these friends and their co-workers all strive to achieve their entrepreneurial dreams. Brought to life by local Chicagoans, both in front of and behind the camera, this show gives viewers an authentic portrayal of what life on the South Side is all about. It’s evidence that what you see on the news is only a small piece of the city. South Side was created by Bashir Salahuddin (Glow), Diallo Riddle (Marlon) and Sultan Salahuddin. Bashir Salahuddin, Riddle, and Michael Blieden – all Late Night with Jimmy Fallon alumni – are executive producers. Kellyn Parker and Kelci Parker are executives in charge of the show for Comedy Central.”

What do you think? Have you seen South Side? Will you watch season two?