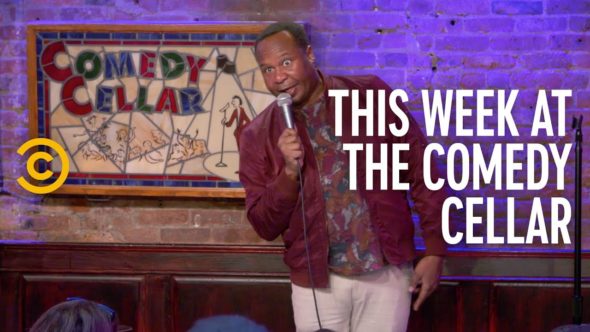 Season two of This Week at the Comedy Cellar premieres on Comedy Central on July 19th at 11 p.m. ET/PT.

NEW YORK, June 19, 2019 – Comedy Central has renewed its weekly topical stand-up series This Week at the Comedy Cellar for a second season, premiering Friday, July 19 at 11 p.m. ET/PT to serve up more piping-hot, unrehearsed comedy from the stage of New York’s most famous comedy club. Produced at a blistering pace and boasting stand-up material that is truly fresh, the series emphasizes jokes about current events and breaking news captured the same week each episode airs. The series promises to deliver a robust collection of the best comics in the country – season one featured 85 comedians throughout seven episodes, and season two aims to showcase even more.

“This Week at the Comedy Cellar captures the essence of what it’s really like in this iconic comedy club on a night-to-night basis, giving fans of stand-up across the country a window into that experience,” said Sarah Babineau and Jonas Larsen, Executive Vice Presidents and Co-Heads of Talent and Development for Comedy Central. “We were thrilled the response we received from stand-up fans and comics alike was so overwhelmingly positive – there truly is nothing like this series being produced right now – and knew we had to bring it back for more.”

Interspersed among the stand-up sets is a one-of-a-kind look at the famed Comedy Cellar “comics’ table,” where featured comedians debate the week’s topics and discuss how they take what everyone’s been talking about and spin it into comedy. Each episode also features a Comic Spotlight profiling a specific comedian from the series. Click here for a playlist of last season’s spotlights.

Comedy Central will post the extended comedian roundtable discussions and stand-up highlights weekly on the Comedy Central Stand-Up YouTube Channel and cc.com/StandUp. In addition, full episodes of This Week at the Comedy Cellar will be available the day after premiere on the Comedy Central App and cc.com. Fans can follow the social conversation about the series on Twitter @StandUp (74.6k) and Instagram @ccstandup (316k) using the hashtag #ComedyCellar.

What do you think? Have you seen This Week at the Comedy Cellar? Will you watch season two?