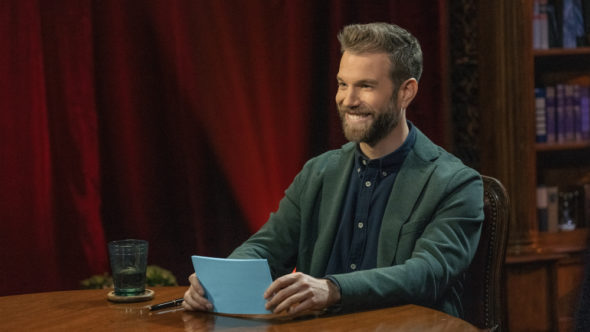 The comedy series sees Jeselnik use “his signature acerbic style in tongue-in-cheek interviews with his fellow comedians about their careers, influences and what it’s like to live in his massive shadow.”

Comedy Central has ordered eight episodes for season two of Good Talk with Anthony Jeselnik. You can read more info below:

NEW YORK – December 11, 2019 – Comedy Central announced today that Good Talk with Anthony Jeselnik has been renewed for an eight-episode second season. In Good Talk, Jeselnik employs his signature acerbic style in tongue-in-cheek interviews with his fellow comedians about their careers, influences and what it’s like to live in his massive shadow. Jeselnik and his guests center their extremely funny conversations around career, stand up, stories and bits and participate in elegantly bizarre studio segments.

“Anthony has a knack for wit and irony in the flow of conversation, which makes him a hilarious and great interviewer,” said Sarah Babineau and Jonas Larsen, Co-Heads of Original Content. “It’ll be a treat to see him continue to push boundaries with an all-new lineup of comedian friends.”

Good Talk with Anthony Jeselnik premiered in September with each episode featuring an interview with one of Anthony’s friends – who happen to be some of the best comedians in the business – as they discuss all things comedy. In its first season, Jeselnik sat down with Nick Kroll, Natasha Leggero, Kumail Nanjiani, Tig Notaro, Kristen Schaal and David Spade. To catch-up on the full episodes, Good Talk with Anthony Jeselnik is also available as a podcast on Apple Podcasts, Spotify and everywhere fine podcasts are found.

Good Talk with Anthony Jeselnik is part of Comedy Central’s multiplatform development deal with the irreverent, iconoclastic comedian, which includes The Jeselnik and Rosenthal Vanity Project podcast, currently in its second season. The #1 brand in comedy has also previously collaborated for two seasons of The Jeselnik Offensive and his 2013 stand-up special, Caligula.

The Jeselnik and Rosenthal Vanity Project podcast is part of Comedy Central’s Global Podcast Network. The weekly podcast series features Jeselnik and Gregg Rosenthal, a writer and podcaster for the NFL Network. The two have been best friends for 20 years, and the podcast is mostly about Anthony and Gregg making fun of current events, their producer and each other. New episodes of JRVP go live weekly on Spotify, Apple Podcasts, and all other major podcast outlets.

Jeselnik, Christie Smith and Meaghan Rady are executive producers of Good Talk with Anthony Jeselnik, with Rady also serving as showrunner. Anne Harris, Tara Schuster and Jackie Sosa are executives in charge of the series for Comedy Central.

Comedy Central gives audiences access to a world of super funny, personally relatable, culturally relevant, and provocative comedy that tells the funny truths of life, every day and everywhere. From award-winning late-night, scripted and animated series to stand-up specials, short-form and sketch, Comedy Central has it all. A subsidiary of Viacom Inc., Comedy Central is available to more than 300 million households in over 150 countries across the globe.”

What do you think? Are you a fan of Good Talk? Will you watch season two?