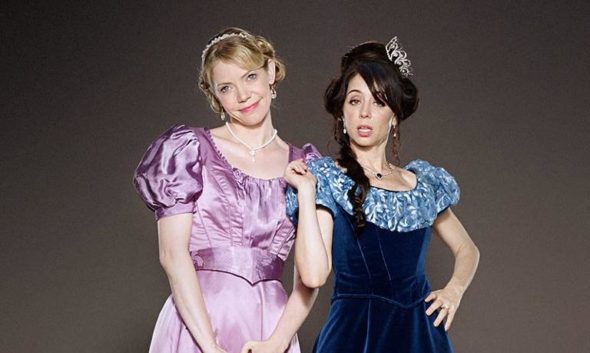 “This is our moment.” This week, Comedy Central announced season three of Another Period will debut in January.

Season three of Another Period premieres on Comedy Central on January 23rd at 10:30 p.m. ET/PT.

NEW YORK, December 6, 2017 – Greedy. Corrupt. New money. Hungry for fame. Sound familiar? Newport, RI’s first family, the Bellacourts, are back with the third season premiere of Another Period on Tuesday, January 23 at 10:30 p.m. ET/PT! The third season of the turn-of-the-century historical and satirical scripted series, co-created by and starring Natasha Leggero and Riki Lindhome, directed by Jeremy Konner and executive produced by Ben Stiller’s Red Hour, follows the fifth season premiere of Drunk History. Prior to the new season, fans can indulge themselves like a Bellacourt by binging on the first two seasons of Another Period, available now on cc.com and the Comedy Central App.

Now in its third season, Another Period tells the incredible story of the Bellacourt sisters, Lillian and Beatrice (played by Leggero and Lindhome), who are defined by their family’s wealth and care only about becoming super famous – which is a lot harder in 1902. The series follows the insanely decadent and outrageous life of the Bellacourt coterie which, before others claimed their own fame, were the one American family who epitomized all that was spoiled, shameless and stupid – with more servants than relatives and days filled with money, sex, drugs… and more money.

In the upcoming season, The Bellacourts’ fight for suffrage in congress, become some of America’s first female Olympic athletes, deal with an opioid addiction and campaign to make America great again, for the first time.

Throughout the new season fans can check out cc.com/anotherperiod and follow the series’ Facebook, Twitter and Instagram accounts to discover new clips, episodes, memes and gifs to become fully immersed in the Bellacourt’s baller lifestyle. Third season episodes of Another Period will be available the day they premiere via cc.com and the Comedy Central App and will be available the next day on iTunes, Amazon Video, VUDU, Microsoft Movies & TV, Verizon Multi-Screen, Google Play, and Frontier Communications. The Season Pass will be available for pre-order on January 15.

Another Period was co-created by and stars Natasha Leggero and Riki Lindhome, who also serve as writers, and is directed by Jeremy Konner (Drunk History). The series’ executive producers are Leggero, Lindhome, Konner and Red Hour’s Ben Stiller, Debbie Liebling, Stuart Cornfeld and Mike Rosenstein. Monika Zielinska and Tara Schuster are the Executives in Charge of Production for Comedy Central.”

What do you think? Are you a fan of Another Period? Will you watch the new season?