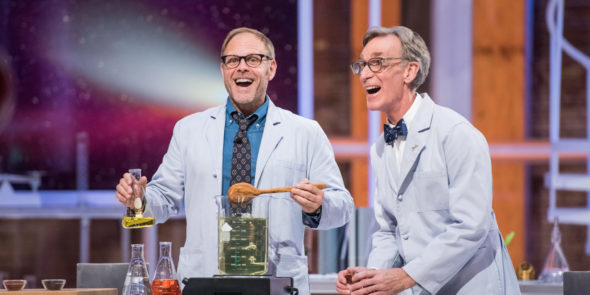 Season two includes a new segment, #BillMeetsScienceTwitter, after scientists from all over the world reached out to Nye via Twitter following the series launch of Bill Nye Saves the World. In each episode, Nye showcases the incredible work from scientists he met on Twitter, including a doctor who generates computer simulations of space and time, a math oncologist trying to match patients with the right treatments, and a doctor studying how our brains regulate sleep.

Michael Naidus, Julie Pizzi and Gil Goldschein serve as executive producers on the series. Bill Nye Saves the World is produced by Bunim-Murray for Netflix.

The Emmy-nominated series returns as Bill talks sleep, drugs, internet security and more with a fresh batch of famous guests and science experts.

Bill visits a cannabis dispensary in Hollywood and takes a trip through hemp history. Kevin Smith and other panelists weigh the pros and cons of weed.

Episode 2: Your Computer Is Under Attack

From phishing to malware, Bill uncovers the scams that steal our data. Steve O talks about the time he exposed himself … to hackers.

Episode 3: We Suck at Sleeping

In search of better sleep, correspondents seek out NASA scientists and a professional cuddler. Bill busts myths about naps, dreams and turkey.

Bill spreads bad news about antibiotic-resistant gonorrhea and other superbugs. Comedian Ali Wong stops by the studio for a glow-in-the-dark demo.

Episode 5: Extinction: Why All Our Friends Are Dying

OK Go and Drew Carey help Bill explain extinction, and the panel reveals how scientists could one day bring extinct species back to life.

Episode 6: How to Travel Through Time

Bill breaks down the science of time travel with guests Zach Braff, retired astronaut Scott Kelly and the minds behind “Star Trek” and “Lost.”

What do you think? Have you seen Bill Nye Saves the World? Will you watch season two?