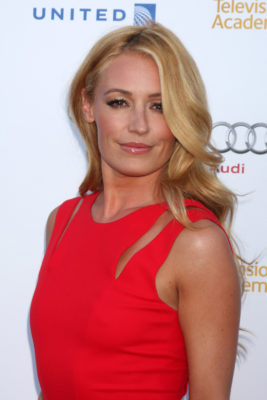 Cat Deeley is coming to Lifetime. Recently, the network announced the So You Think You Can Dance host has joined the upcoming TV show This Time Next Year.

Hosted by Deeley, the series “follows the emotional journeys of ordinary people as they embark on extraordinary missions to change their lives, over the course of just twelve months.”

This Time Next Year premieres on Lifetime on January 16th at 10 p.m. ET/PT.

LOS ANGELES, CA (December 6, 2017) — Just in time to make New Year’s resolutions, Lifetime debuts new series, This Time Next Year, with Emmy nominee Cat Deeley as the host. The show follows the emotional journeys of ordinary people as they embark on extraordinary missions to change their lives, over the course of just twelve months. But what would have been one year for them, is only moments for viewers as each transformation is revealed instantaneously as participants enter one door and emerge from another, showing off a new version of themselves. Based on the UK format from Twofour, This Time Next Year premieres on Lifetime this January, 16 at 10pm ET / PT.

From reconstructive surgeries to heartwarming reunions, infertility to weight loss, no hurdle is too big for the brave individuals who have chosen to take control of their lives on This Time Next Year. Before she sends them off on their journeys, Deeley meets each participant and they make their personal pledge for change in front of a live audience. Only after their reveal will viewers learn how, and if, they achieved their goals as the participants relive their challenges and share their successes.

This Time Next Year is produced for Lifetime by Twofour America. Executive producers include Melanie Leach, Andrew Mackenzie, Bernie Schaeffer and Laurie Girion. David Hillman executive produces for Lifetime. This Time Next Year is currently in production in 14 territories and has received multiple awards including, Best Factual Entertainment Format at the C21 International Format Awards and Best New Format at the Realscreen Awards.”

What do you think? Do you watch Lifetime? Will you watch This Time Next Year?

Cat could win an Oscar for that show.