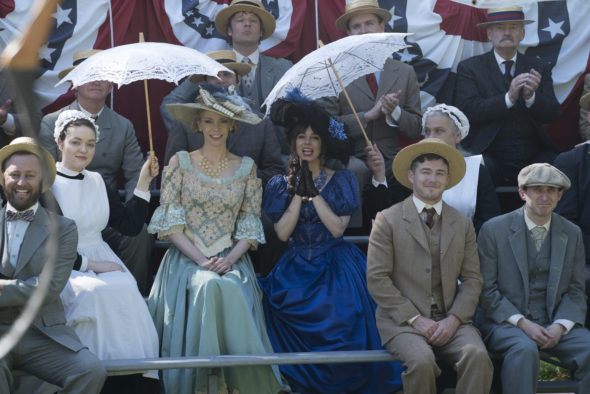 How large do the Bellacourts live during the third season of the Another Period TV show on Comedy Central? As we all know, the Nielsen ratings typically play a big role in determining whether a TV show like Another Period is cancelled or renewed for season four. Unfortunately, most of us do not live in Nielsen households. Because many viewers feel frustration when their viewing habits and opinions aren’t considered, we’d like to offer you the chance to rate all of the Another Period season three episodes here.

What do you think? Which season three episodes of the Another Period TV series do you rate as wonderful, terrible, or somewhere between? Should Comedy Central cancel or renew Another Period for a fourth season? Don’t forget to vote, and share your thoughts, below.

11/29/18 update: Comedy Central has cancelled Another Period so there won’t be a fourth season. Details here.

I absolutely LOVE Another Period. I’m completely addicted, and a little bit obsessed…I find myself getting aggitated if something else takes its place in the weekly lineup or heaven forbid i forget to record it…It’s definitely my favorite comedy show, and in the top 3 favs of any current shows. Knowing that a new season is about to start or that i have a new episode waiting for me just makes the winter months between Chrulistmas and Easter actually makes those months bearable…My only complaint is that I’d love to see more…. If not more episodes per season, then at… Read more »