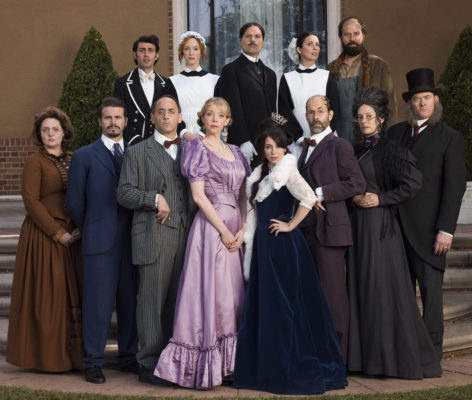 Another Period is back with a new season for the new year. Today, Comedy Central announced the TV show’s third season will premiere in January.

Season three of Another Period premieres on Comedy Central on January 23rd at 10:30 p.m. ET/PT.

NEW YORK, November 28, 2017 – Raise your glass and get to class! The Emmy®-winning Comedy Central series Drunk History returns for its fifth season with the first of seven all-new episodes premiering on Tuesday, January 23 at 10:00 p.m. ET/PT, followed by the third season premiere of Another Period at 10:30 p.m. ET/PT. Fans can catch up on season four on the Comedy Central App and at cc.com/drunk starting Tuesday, January 9. Drunk History will return to conclude its fifth season later in 2018 with another six all-new episodes.

During the premiere episode Tiffany Haddish narrates museum curator Rose Valland’s (Busy Philipps) risky quest to save Europe’s masterpieces from the Nazis; Paget Brewster slurs her way through the story of Deborah Sampson (Evan Rachel Wood), the first woman to take a bullet for America during the Revolutionary War; and Amber Ruffin recalls the bravery of “The Angel of the Battlefield,” Clara Barton (Mandy Moore), who founded the American Red Cross with the help of surgeon James Dunn (Alexander Skarsgård) and Abraham Lincoln (Jack McBrayer).

Episodes from the new season will be day after air via the Comedy Central App on iTunes, Amazon Instant Video, Xbox Video, Sony Playstation, Vudu, Verizon Flexview, and Google Play. Fans of the show can connect with other Drunk History buffs, watch show clips, and check out exclusive Behind the Scenes content on Facebook and Twitter. Throughout the season, we’ll also be serving up the best, most shareable moments on giphy.com.

Created for television by Derek Waters and Jeremy Konner, Drunk History is produced by Central Productions and executive produced by Waters and Konner, along with Gary Sanchez Productions’ Will Ferrell, Adam McKay and Owen Burke. Ian Friedman and Daniel Wolfberg are the Executives in Charge of Production for Comedy Central.”

What do you think? Are you a fan of Another Period? Are you excited for the new season?