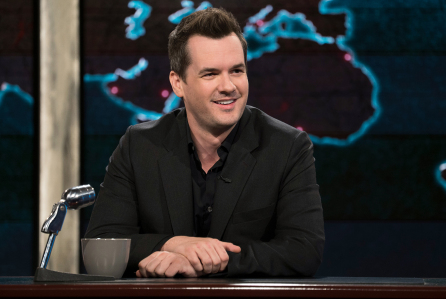 The Jim Jefferies Show is coming back soon! Today, Comedy Central announced the TV show will return for a third season in March.

NEW YORK, February 1, 2019 – Comedy Central and Jim Jefferies have entered into a deal for a ‘first look’ at content created and/or developed for television and digital media, and a pick-up of late night series The Jim Jefferies Show for a 20 episode third season, it was announced today by Sarah Babineau and Jonas Larsen, Executive Vice Presidents and Co-Heads of Talent and Development, Comedy Central.

“We love Jim’s unfiltered, insightful, hilarious and global comedic perspective on the insane world we’re living in right now,” said Babineau and Larsen. “We are excited for him to continue to connect with our audience through The Jim Jefferies Show and other future projects that we develop together.”

“I love my unfiltered, insightful, hilarious and global comedic perspective on the insane world we’re living in right now,” said Jefferies. “I am excited for me to continue to connect with my audience through The Jim Jefferies Show and other future projects that I develop together.”

The Jim Jefferies Show is a weekly, topical, late night series which premiered on June 6, 2017 and received a Writers Guild Award nomination in the Comedy/Variety Talk Series Category in its first season. The show features the Australian comedian’s unapologetic, honest and international approach to culture and politics. Jefferies tackles the week’s top stories from behind the desk and travels the globe to far-off locations to provide an eye-opening look at hypocrisy around the world. His sharp take on topics such as immigration, gun control, big game hunting, the National Anthem protests and sexual harassment have pushed the host into the mainstream late night conversation.

Jefferies, Scott Zabielski, Jason Reich and Brillstein Entertainment Partners’ Alex Murray and Tim Sarkes are the Executive Producers of The Jim Jefferies Show. Adam Londy and Daniel Wolfberg are the Executives in Charge of Production for Comedy Central.”

What do you think? Are you a fan of The Jim Jefferies Show? Will you watch the new season?

I LOVE the Jim Jeffries Show. We never miss an episode.

I can never watch him again, I have seen him edit interviews of two people to make them look bad. I’m fine with him not liking them, and reporting what they do, but to lie, cheat, and all that stuff, can’t stand the guy anymore.

jim is funny-better than john stewart ever was

Love Jim Jeffries! He’s rekindled some of the old John Stewart magic of days gone by. I only wish he were on daily instead of just weekly. Can’t get enough of that Jeffries stuff !