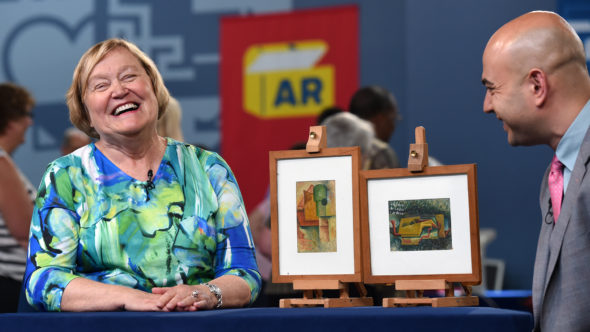 Antiques Roadshow is back in action! PBS just announced the TV show will return for its 24th season in January.

The new season of the long-running antique appraisal series will travel to Delaware, North Dakota, California, Arizona, and more. Items include a prop from Raiders of the Lost Ark, a Kanye West collectible, and an Alamo keepsake.

Season 24 of Antiques Roadshow debuts on PBS on January 6th at 8 p.m. ET/PT.

December 11, 2019, BOSTON, MA — From an instantly-recognizable pop culture prop to a never-before-seen knockout reaction, PBS’s most-watched ongoing series continues to deliver surprises every week! Kicking off January 6 at 8/7C PM, ANTIQUES ROADSHOW visits five distinctive locations across the country to discover an all-new season of fascinating finds and the sublime stories that accompany them.

The 17-time Emmy® Award-nominated series will bring viewers along on its visits to a vibrant botanical garden in the desert, a living history celebration of our pioneer past, and more in the three one-hour episodes produced at each venue.

“This new season includes some of my favorite ROADSHOW moments in recent memory,” says ANTIQUES ROADSHOW executive producer Marsha Bemko. “Just when I think I’ve seen it all, the guests, objects, and stories we capture amaze me all over again. And if I am surprised, I think it’s a safe bet you will be too!”

A selection of surprises from the 25-episode season include:

Seen by up to eight million viewers each week, ANTIQUES ROADSHOW is PBS’s highest-rated ongoing series. It is produced by WGBH Boston.”

What do you think? Are you a fan of Antiques Roadshow? Will you watch the new season?

I love watching this show with my mom…. So gald for a new season!!♥️♥️♥️♥️