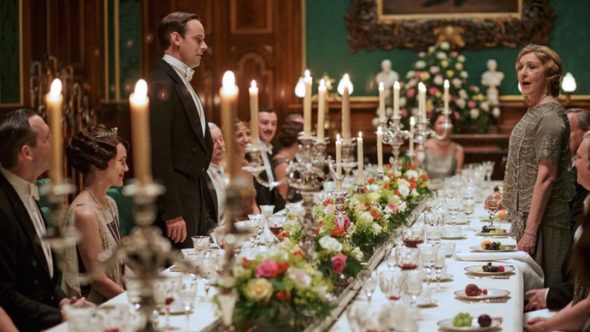 Downton Abbey may be over, but there’s at least one scene you’ll never forget. The creative team behind the ITV/PBS series recently spoke with Variety about the infamous bloody dinner scene with Lord Grantham.

The historical drama finished airing its sixth and final season this past winter in the U.S.

The idea for having the scene from ‘Alien’ in the show came from Julian Fellowes. He had spoken some time ago with a doctor and saw all this dramatic potential in the fact that (Grantham’s) ulcer could burst rather spectacularly.”

He mentioned that everyone had to plan the scene meticulously because the house they shoot in is full of priceless antiques:

That van Dyck painting alone is worth, I don’t know what, $25 million? The idea of an actor sitting adjacent to it spitting a lot of fake blood out of his mouth was something that took a lot of care and planning.”

Neame added the whole scene had to be reset after one take:

Engler and his first assistant, Matt Carver, had to intricately break the scene down shot by shot, working out every detail and working out the most economical way to shoot the scene in the time available. Once Hugh Bonneville did one of these takes with the blood going everywhere, the whole thing had to be reset. He had to be changed, the room had to be reset and made good again. They shot everything on every angle before the blood, and then they put the blood in his mouth and redid everything again post the blood.”

What do you think? Did you watch Downton Abbey? Do you remember the bloody dinner scene? Were you shocked?