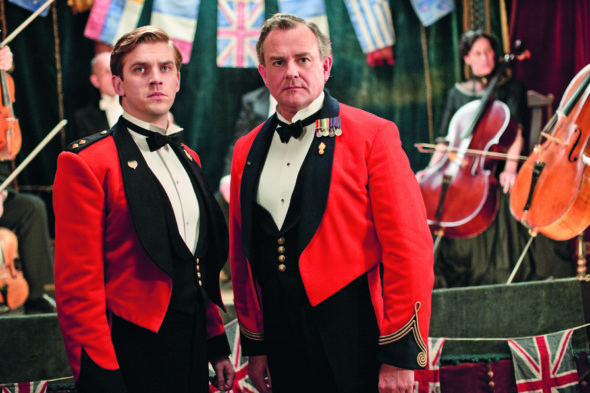 (Courtesy of © Carnival Film and Television Limited for MASTERPIECE)

This has been a horrific year for hurricanes. Puerto Rico, Texas, the U.S. Virgin Islands, and Florida are among the places still trying to recover. The historic city of St. Augustine, Florida is among those places which have withstood two hurricanes in less than a year. Now some economic stimulus is on its way — thanks to the beloved Downton Abbey TV show.

That help is coming in the form Dressing Downton, an exhibit highlighting the fashion of Downton Abbey. Dressing Downton just opened this week, at the Lightner Museum in St. Augustine and is expected to attract a lot of tourists (and their money). Watch the coverage from First Coast News, below. Downton Abbey ran for six seasons on PBS, between 2011 and 2016. The cast includes Hugh Bonneville, Elizabeth McGovern, Michelle Dockery, Laura Carmichael, Jessica Findlay Brown, and Maggie Smith.

This Dressing Downton exhibit showcases costumes from the internationally popular Downton Abbey television show. It blends them with antiques from the Lightner Museum’s collection.

“Now people will get to feel like they are on set with the actors,” said Nancy Lawson, the Dressing Downton Exhibition costume curator.

Everywhere, this exhibit has landed in eight other U.S. cities and the turnout has been immense.

“There’s something called the Downton Abbey effect,” Jessica Fellowes said. She is an author and lecturer on everything Downton Abbey. She is also the niece of the show’s creator, Julian Fellowes.

She said because Downton Abbey is so popular, whatever it touches, succeeds and sparkles.

“For example, in England, they’ve had an increase in tourism because of people visiting stately houses there,” she explained.

One U.S. museum that carried this costume exhibit saw visitor numbers climb by 300 percent. The Lightner Museum expects 60,000 to 80,000 visitors in three months with the exhibit. Typically, the museum has 100,000 visitors in one year.

“It will bring an element of museum-goers and visitors like we haven’t had for a long time,” he noted.

What do you think? Are you a fan of the Downton Abbey TV series? Will you check out the Dressing Downton exhibit, if/when it comes to your town?