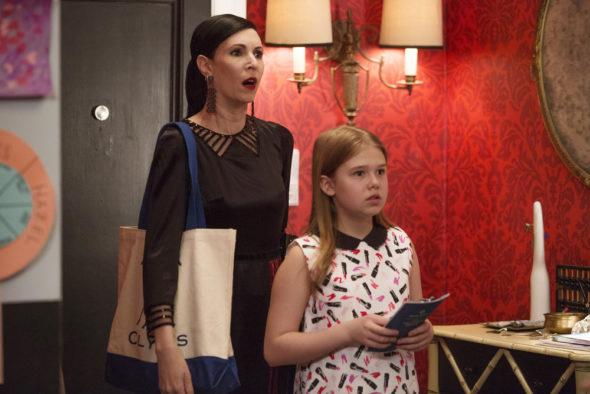 Talk about being on the outs. It seems the Odd Mom Out TV show has been cancelled after three seasons on Bravo. There’s been no network confirmation that there will be no fourth season, but creator and star Jill Kargman has announced on social media that Odd Mom Out is indeed ending, which is official enough for us. In addition, Kargman’s co-star, Sean Kleier, has also addressed the end of the sitcom. Check it out, below.

A Bravo scripted comedy, Odd Mom Out stars Kargman as New Yorker Jill Weber. The cast also includes Abby Elliott, Andy Buckley, Joanna Cassidy, KK Glick, and Sean Kleier. Jill is a wife, mother, and fashionista who wants to stay true to herself and resist all those temptations the people in her life hold dear. In season three, Candace (Cassidy) moves in with Jill and Andy (Buckley) and turns their lives upside-down. Meanwhile, Vanessa (Glick) tries support Jill, while also trying to maintain the spark with her ex-husband.

First, Kargman posted about her gratitude to Bravo and NBCUniversal for the three seasons of Odd Mom Out.


#OddMomOut is over. So grateful 2 @bravotv @nbc my tv fam & @jillkargman – I'd follow u to the gates of the Time Square Olive Garden. ❤️ u. pic.twitter.com/CYGrW5rcbf

Kargman then responded to him and expressed her fondness for him and his work.

What do you think? Are you a fan of the Odd Mom Out TV series? Is it ending at the right time? Should Bravo have cancelled or renewed Odd Mom Out for a fourth season? Sound off, below.

I absolutely loved this show actually my favorite on the network. Such a welcome change from all the housewives. Should rethink this!!!

I love the humor of this show. I can’t believe Bravo would cancel it! They should cancel the silly Real Housewives Series.

This is nuts!! The show was well cast, great acting and well written. Bravo is coming out with that make you lose brain cells. This show intelligent and sassy.
Why???

NOOOOOOOOOO! love this show and hate to see it go! Just one more season to tie things up! @andybuckley @bravoandy

Oh NO! I want more Jill!! I love the stylish, kickass 40something mom. Can another network pick it up for a 4th season? Bad move Bravo. One of few smartly written shows in the swamp of Housewives garbage that comprises most of your programming.

Every time you get into a show that you really like, it’s gone, just like that. Will miss this show a lot. Sad to see it go.

I’m so sad I liked this show from day one. I would hope that Bravo could see this ine of the best scripted based shows on tv.

Bravo has made a huge mistake. Odd Mom Out is brilliant. If network cannot figure it out, I hope Netflix or Hulu pickup Season 4.

Cancel trashy Tardy for the Party.

Noooooo! I’m so sad to hear this. I think this show was getting better every season and couldn’t wait for number four. I’ll miss you Jill!

I do NOT think the series is ending at the “right time” as we didn’t really “wrap things up.” I love this hilarious show and don’t think it’s even close to being done. Sorry, I have not had enough of Jill’s shenanigans!