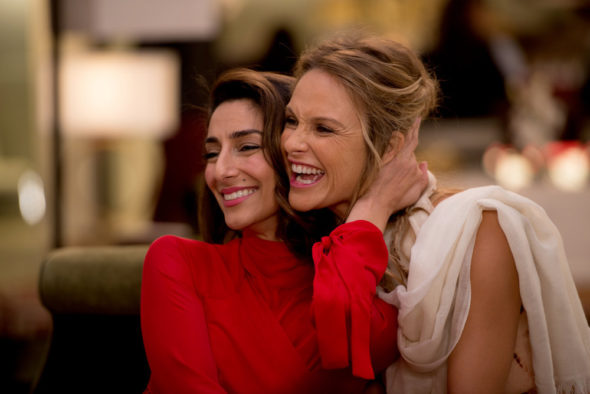 Will Abby’s girlfriends keep guiding her through this strange new world? Has the Girlfriends’ Guide to Divorce TV show been cancelled or renewed for a fourth season on Bravo? The television vulture is watching for the latest cancellation and renewal news, so this page is the place to track the status of Girlfriends’ Guide to Divorce season four. Bookmark it, or subscribe for the latest updates. Remember, the television vulture is watching your shows. Are you?

Airing on the Bravo cable channel, Girlfriends’ Guide to Divorce follows self-help and family guru Abby McCarthy (Lisa Edelstein). Abby shocks the world when she reveals that she has separated from her husband and she soon finds her career in a free fall. As she starts to navigate life as a middle-aged single woman, Abby turns to her divorced friends for advice. The TV show’s cast also includes Alanna Ubach, Beau Garrett, Necar Zadegan, Retta, and Paul Adelstein.

It seems the Girlfriends’ Guide to Divorce TV show is taunting me over my impending starvation. After only two seasons, Bravo announced it was renewing the comedy drama series for three more seasons, after which it would be cancelled or end. Meanwhile, I must pine away here, not knowing where to find my next meal, while this show with a death sentence continues on through its fifth and final season. Where’s PETA when you need ’em?

What do you think? Do you think the Girlfriends’ Guide to Divorce TV show is ending at the right time? Do you wish Bravo had renewed it through season six, instead?

I love this show and I do not want it to end!

I love this show! I never want it to end

I love the show. Glad that they ended the relationship with Abbie and Mike Brady. Such a let down from the hotties that she was with. But overall, I enjoy the show.

Love the show and of course I Hope will see a season 4
I relate to Abby quite a lot and of course for that reason alone I can be more partial to the show. But Never the less, amazing cast and well written. Covers everything from drama to suspense, to love, crying and laughing unpredictable situation with a crazy twist.
Love it!
Thank you!