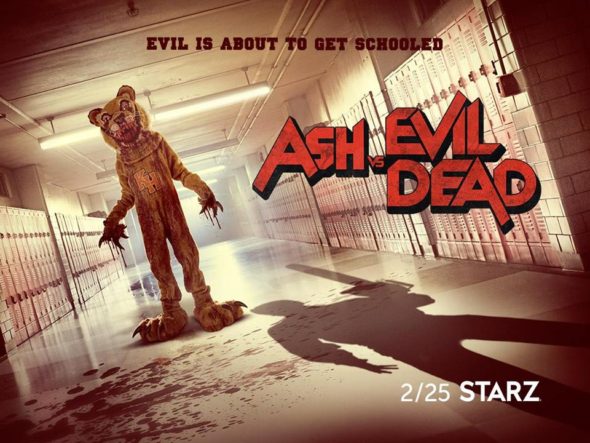 Looks like Ash Williams is going back to school. Starz has announced the third season of its Ash Vs Evil Dead TV show will premiere on Sunday, February 25, 2018. The season three key art (above) teases: “Evil is about to get schooled.” The series, from Sam Raimi, Ivan Raimi, and Tom Spezialy, is a sequel to the Evil Dead feature film trilogy.

A gory horror-comedy, Ash Vs Evil Dead stars Bruce Campbell, Ray Santiago, Dana DeLorenzo, Lucy Lawless, Michelle Hurd, and Arielle Carver-O’Neill. When the Starz series opens, approximately 30 years after the movie franchise, Ash (Campbell) is working at ValuStop. After inadvertently reading from the Book of the Dead, he unleashes the Kandarian Demon once again. Now it’s up to Ash to save the world, again.

The Ash Vs Evil Dead season three release date was announced on the show’s official Twitter account. Check it out.


The man. The myth. The hell? Go back to school with #AshvsEvilDead, premiering 2/25 on @STARZ. pic.twitter.com/dooBBbifV6

Starz renewed Ash Vs Evil Dead for season three, back in October of 2016, about a week after the season two debut.

The Season 3 logline: Ash’s status in Elk Grove, MI, has changed from murderous urban legend to humanity-saving hometown hero. When Kelly witnesses a televised massacre with Ruby’s fingerprints all over it, she returns with a new friend to warn Ash and Pablo that evil isn’t done with them yet.

What do you think? Are you a fan of the Ash Vs Evil Dead TV series? Do you plan to check out season three when it premieres on Starz? Sound off, in the comments.