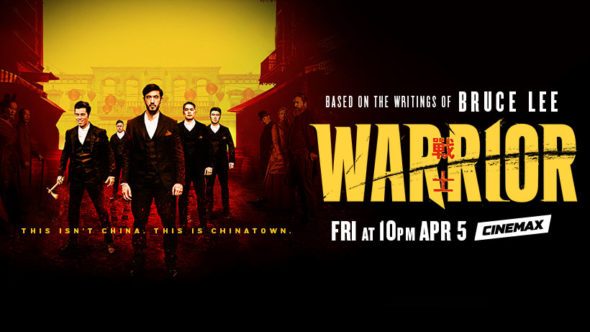 Some series have to fight a long time to make it to the small screen, but perhaps none has been in the ring longer than the new Warrior TV show on Cinemax. The late martial arts legend Bruce Lee first conceived of the concept, but passed away in 1973. Decades later his daughter, Shannon Lee, brought the treatment to Justin Lin, and they enlisted Banshee vet Jonathan Tropper to create a thoroughly modern script for this period piece. Now that has made it to premium cable, does it have the mettle to earn a return? Will Warrior be cancelled or renewed for season two? Stay tuned. *Status update below.

A Cinemax action drama, Warrior stars Andrew Koji, Kieran Bew, Olivia Cheng, Dianne Doan, Dean Jagger, Langley Kirkwood, Hoon Lee, Christian McKay, Joe Taslim, Jason Tobin, Joanna Vanderham, Tom Weston-Jones, and Perry Yung. The series follows Chinese immigrant Ah Sahm (Koji), who arrives in San Francisco in 1878, during the Tong Wars, to look for his sister, Mai Ling (Doan). As a gifted fighter, it is not long before one of the local organized crime factions, known as a tong, recruits Ah Sahm to be its hatchet man. The story also centers on the racial tensions of the time between Chinese and Irish immigrants, and their dealings with the cops and politicos.

What do you think? Do you like the Warrior TV series? Should this Cinemax TV show be cancelled or renewed for season two?

*4/24/19 update: The Warrior TV show has been renewed for a second season on Cinemax.

Warrior is a terrific look at the West from a different perspective. If you’re a Bruce Lee fan you’ll love this series. It is well acted, well written and the fight scenes are incredible.

Really enjoying. If you like action, drama and history in your cup of tea then this show will excite you. To me this show is a natural for anyone who might be enjoying say Into The Badlands but want grounded martial arts instead of fantasy wire work. I don’t know how accurate the show is historically but it feels like it gives a pretty good insight into what life was like in the late 1800’s during the Tong Wars in San Francisco. My Dad and I are both Irish heritage and its very interesting for us to watch this show.… Read more »

This is an excellent show. It would be ridiculous, foolish and disappointing if this series does not become a bigger and longer running franchise than David carridines garbage. This is the BEST SHOW ON TELEVISION RIGHT NOW. Well acted, with multiple layers, and excellent choreography. I’m more excited to see where this is going than the end of game of thrones, and I am a GOT fan. Ok I might be slightly exaggerating, but only slightly. If this show isn’t renewed I will be exceedingly disappointed and lose all hope for mainstream television. There is depth, action, room for plot… Read more »