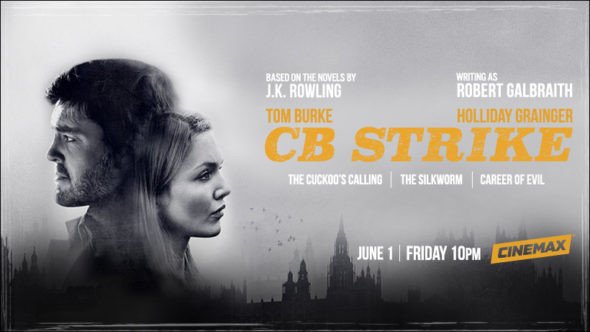 The first season of the CB Strike TV show on Cinemax originally aired in UK on BBC One, as a mini-series called Strike. Because the seven-episode season is based on a series of novels, subsequent seasons are only likely if new books are released. How much will the first season’s ratings success play into all of these decisions? Ultimately, will CB Strike be cancelled or renewed for season two? Stay tuned.

What do you think? Do you like the CB Strike TV series? Should this Cinemax TV show be cancelled or renewed for season two?

PLEASE! Make more seasons. It just gets better and better. And I love the chemistry between Cormoran and Robin.

I normally don’t watch British TV shows but one day I saw it in the schedule and the name intrigued me. I was hooked with the first show. Tom Burke and Halliday Grainger are perfect for the parts. Great casting and great character interactions. Just what you would expect from J.K. Where I live they are just showing the first few episodes and I hope the show renews for many years. I love it.

One of the best shows on TV hoping for the return

Absolutely one of the best shows on tv right now! Loved it! Please make more!!!

Loved the show. The best of the year. PLEASE renew.

I love this show! It’s like a hidden gem. The acting is great. I love that there were different “cases” throughout season 1. I also really appreciated that Cormoran isn’t a super-human after having his leg amputated, but rather, he’s like us mere mortals with pain and inconveniences. Please keep it! Tom Burke and Halliday Grainger are excellent!

Love The Show!! Keep It Going

CB Strike is a fantastic show. If you haven’t seen it yet, watch it on demand. It is well worth it. Please renew this show.