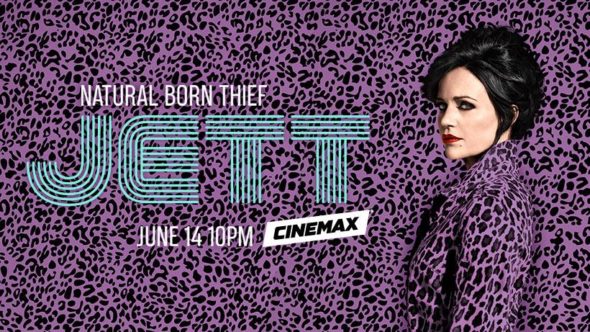 What do you think? Do you like the Jett TV series? Should this Cinemax TV show be cancelled or renewed for season two?

*1/16/20 update: Jett has been cancelled so, there won’t be a second season on Cinemax.

Please, please don’t cancel Jett.
Carla Gugino is a bad ass!
In additional to the males, give her a female antagonist.
Gina Gershon, from Bound, comes to mind.
Please give us another season!

NO! DON’T CANCEL !!!!! My husband and I binged watched all 9 episodes and it made us want more!

In the finale, Jett gives some smirky expression, what was that about?

Love it! Carla is awesome as Jett & the rest of the cast shine as well. PLEASE RENEW!!

Hope there is a season 2! One of the better new shows.

Yes please renew the series for once something interesting and super great not cheesy and stupid!!!

I throughly enjoyed this series and hope that the powers that be renew the project for another season. I haven’t heard much chatter about this show which tells me that not enough people know about it. I will be doing my part to remedy this on my social media I hope anyone else who enjoyed it does the same. I stumbled on the show quite by accident and binge watched the first 8 episodes, I can’t wait for the finale !!!

Love the pitch. Love the writing. Love the cast. Love the shooting and cut.
Charles’mens (Bennie & his team mate) make me think of Vince & Jules un Pulp Fiction 😀
Love them 🙂

Do not cancel Jett. We have watch parties for it. Reminds me of Banshee and I loved that show. Give it a chance

It’s on Cinemax for a reason.

James My Friend
Reply to  MsElizzie

I disagree. Canceling a series because you ignore the warnings and you were offended is not the rest of the worlds problem !!! I prefer that television written for adults should not be watered down. There are plenty of 14+ Rated shows with no nudity and mild language for your viewing pleasure.

MsElizzie, first I saw the 8 episodes so I don’t know where the man on man scenes are..sorry I missed them. ..And second it’s ignorant to want to cancel a show because YOU are offended?? Change the channel lady and don’t be so pious!