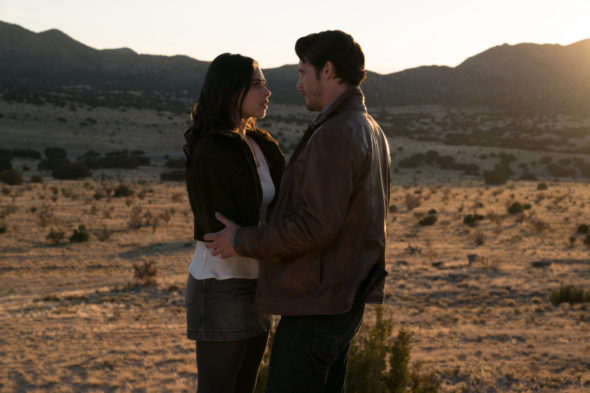 Appleby teased the episode to The Hollywood Reporter, saying:

Oh yeah, there’s something specific that happens in the story of this episode that she wanted me to direct. It was [shooting] over Halloween and I have two little kids, so I asked “Is there any way I could do a different episode?” And she was like, “We really, story-wise, want you to do this one.” And once I read the script I understood why, and was so grateful that they gave me this episode.”

SHIRI APPLEBY DIRECTS – Max (Nathan Dean Parsons) and Michael (Michael Vlamis) travel to Texas to visit a faith healer, who may be able to shed some light on the alien symbol Max has been researching. Meanwhile, Maria (Heather Hemmens) and Liz (Jeanine Mason) pay a visit to the same faith healer in hopes of finding a cure for Maria’s ailing mother. Elsewhere, Alex (Tyler Blackburn) and Kyle (Michael Trevino) look into what Sargant Manes may be hiding. Shiri Appleby directed the episode written by Sabir Pirzada & Carina Adly MacKenzie (#109). Original airdate 3/19/2019.”

What do you think? Did you watch the original Roswell? Have you seen the CW reboot?

I sampled the most recent episode and it still isn’t up to par with the original Roswell.
Too Bad that it couldn’t pickup where the original show left off .

My daughter and I were disappointed too. We loved the original cast.

I love the new show. Please don’t cancel it.It’s fun, it’s sci-fi, and it’s all about the characters with a sub text of drama. It’s very engaging, and I’d really appreciate a few more sessions. Thanks.