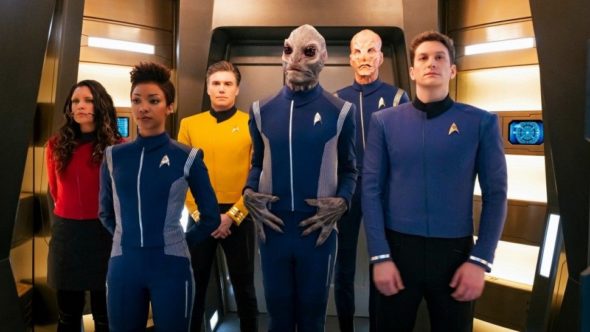 Both Mount and Romijn joined the sci-fi series at the beginning of its second season as Captain Pike and Number One, respectively. The show’s cast also includes Sonequa Martin-Green, Doug Jones, Jason Isaacs, Shazad Latif, Anthony Rapp, and Michelle Yeoh.

According to Deadline, both Mount and Romijn only had one-season deals with Star Trek: Discovery and will not be appearing in season three.

The CBS All Access series is currently in the middle of its second season. A premiere date for season three has not yet been announced.

What do you think? Do you watch Star Trek: Discovery? Will you watch season three?

Of course I’m gonna watch it. I was raised on Star Trek: TOS & think the whole franchise is still #1!

Yes. We’re really “into” it. This program is a winner! So glad it’s being renewed.

I absolutely plan to watch Star Trek: Discovery! I am interested in seeing where Michael and her Klingon love go with the time traveling too.

Absolutely! Love the show and want to see where Michael goes with the time traveling.

Loved Season 2. Better than 1st for sure. I want season 3 for sure

Rebecca Romijn has been in one episode for a total of ten minutes. Anson Mount has been the best think new trek has done so far

I will not be around for S3 Discovery. In fact I will be opting out of CBS All Access. Its just not worth it. DISCOVERY just isnt for me.