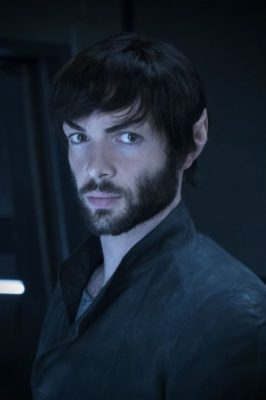 Star Trek: Discovery fans are in for a treat. CBS All Access has just released a first look at Spock and Number One from the TV show’s upcoming second season, Deadline reports.

During New York Comic-Con this past week, CBS All Access released a first look at season two of Star Trek: Discovery, which features a young Spock (Ethan Peck, pictured above). Also, on Instagram, Rebecca Romijn posted a photo of herself as Number One in the upcoming season. The character appeared in the first pilot of the original 1960s series. Footage from that pilot was used in the two-part first-season episode called “The Menagerie”.

What do you think? Do you watch Star Trek: Discovery? Are you looking forward to the new season?

If this is Spock then I’m afraid that the makeup people have gone rather too far.

He looks more like an androgynous hipster and it just doesn’t work.

DON’T mess with the original just to fit in with a fad.

Majel Barrett (Roddenberry) played Number One in the original pilot and the two-part re-edit of the pilot, “The Menagerie.” NBC’s executives disliked the idea of a female in the role and the character never reappeared in the series’ second, successful version of the series. Barrett was recast as more traditional Nurse Christine Chapel, as well as the voice of the ship’s computer.