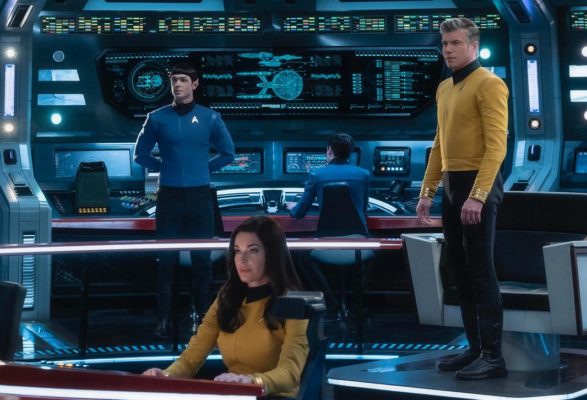 A prequel to the original series, Strange New Worlds “will follow Captain Pike, Science Officer Spock and Number One in the decade before Captain Kirk boarded the U.S.S. Enterprise, as they explore new worlds around the galaxy.” The cast includes Ethan Peck, Anson Mount, and Rebecca Romijn.

CBS All Access has not yet announced a premiere date for Star Trek: Strange New Worlds, but you can read more info below:

May 15, 2020 – CBS All Access today announced a series order for STAR TREK: STRANGE NEW WORLDS, based on the years Captain Christopher Pike manned the helm of the U.S.S. Enterprise. The series will feature fan favorites from season two of STAR TREK: DISCOVERY, Anson Mount as Captain Christopher Pike, Rebecca Romijn as Number One and Ethan Peck as Science Officer Spock. The series will follow Captain Pike, Science Officer Spock and Number One in the decade before Captain Kirk boarded the U.S.S. Enterprise,as they explore new worlds around the galaxy.

“Fans fell in love with Anson Mount, Rebecca Romijn and Ethan Peck’s portrayals of these iconic characters when they were first introduced on STAR TREK: DISCOVERY last season,” said Julie McNamara, Executive Vice President and Head of Programming, CBS All Access. “This new series will be a perfect complement to the franchise, bringing a whole new perspective and series of adventures to ‘Star Trek.’”

“When we said we heard the fans’ outpouring of love for Pike, Number One and Spock when they boarded STAR TREK: DISCOVERY last season, we meant it,” said Alex Kurtzman. “These iconic characters have a deep history in ‘Star Trek’ canon, yet so much of their stories have yet to be told. With Akiva and Henry at the helm, the Enterprise, its crew and its fans are in for an extraordinary journey to new frontiers in the ‘Star Trek’ universe.”

“This is a dream come true, literally,” said Akiva Goldsman. “I have imagined myself on the bridge of the Enterprise since the early 1970s. I’m honored to be a part of this continuing journey along with Alex, Henry and the fine folks at CBS.”

What do you think? Are you a big Star Trek fan? Will you watch Strange New Worlds?

Star Trek: Discovery and Star Trek: Picard were disappointments. Though Cptn Pike was the best part of Discovery. I’ll wait until there’s another free month trial to CBS All Access. It’s not worth the monthly subscription fee.

Can’t wait for another Star Trek series. They are just amazing- and I miss so much going to the Star Trek conventions.

Sometimes all the stars align and this is one of those moments. From the very start, Anson Mount was a truly inspired choice to be a Captain and he would easily have fit in any of the previous captains chairs from Kirk onwards. So if the producers get this right, it could be as good as anything that has come before it. However, there is an element of bitter suite here. Since the end of TNG, Voyager and DS9, nobody seems to have shown desire to take the Star Trek TV franchise into the future, choosing to continuously hark back… Read more »

Would definitely watch any star trek related shows. That is why we belong to CBS all access. When is it expected to start showing?

Can’t wait to see how it plays out as I am a big Star trek fan.

I hope it’ll be better than Star Trek: Discovery and Star Trek: Picard.