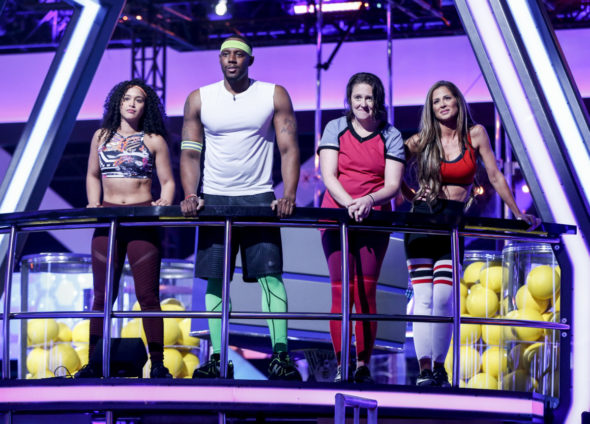 Has this new competition series knocked the audience off its feet? Is the TKO: Total Knock Out TV show cancelled or renewed for a second season on CBS? The television vulture is watching all the latest TV cancellation and renewal news, so this page is the place to track the status of TKO: Total Knock Out, season two. Bookmark it, or subscribe for the latest updates. Remember, the television vulture is watching your shows. Are you?

A CBS reality TV show competition, TKO: Total Knock Out is an obstacle course competition from executive producers Mark Burnett, Barry Poznick, Kevin Hart, Holly Wofford, and Jane Y. Mun. Hart also serves as host on the unscripted reality TV series, which features players from all walks of life. As one contestant races through the obstacle course, the competitors man battle stations along the way. From there, they fire projectiles, in an attempt to knock the racer off of the course and slow his or her progress. The one to complete the course in the shortest time wins a cash prize.

Will CBS cancel or renew TKO: Total Knock Out for season two? The ratings kept dropping and the network moved it to Friday nights so, I believe this series will be cancelled. I’ll update this page with breaking developments. Subscribe for free TKO: Total Knock Out cancellation or renewal alerts.

*Status update: TKO: Total Knock Out has been cancelled so, there won’t be a second season.

What do you think? Should CBS have cancelled or renewed the TKO: Total Knock Out TV show for season two?

Why cancel something tht is actually a good decent & hilarious show as good as TKO, better yet why even make it in the first place & get people into it just to turn around & cancel it, tht just shows how stupid theses tv company’s tht air these shows really are it’s all about the money nowadays instead of the entertainment & thts why I dont support any of the tv corporations anymore I’d rather play my game system than watch tv at least it doesn’t lie or get your hopes up then just do something as stupid as… Read more »

Jeff you are so right about why sjould they cancled Total Knockout for a secound season. my grandparents and I love watching it.

I love tko. Please come back second season. Kevin Hart is the best.

I love Code Black, every other network seems to have a medical series and Code Black was by far better with strong story lines and believable characters. Hope it’s reconsidered.