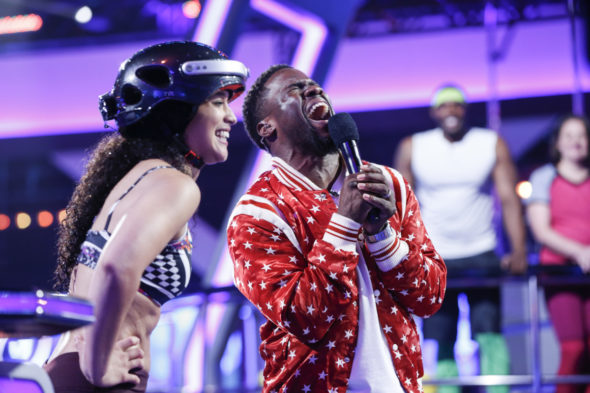 A CBS reality TV series competition, TKO: Total Knock Out is an obstacle course competition from executive producers Mark Burnett, Barry Poznick, Kevin Hart, Holly Wofford, and Jane Y. Mun. Hart also serves as host on the unscripted reality TV series, which features players from all walks of life. As one contestant races through the obstacle course, the competitors man battle stations along the way. From there, they fire projectiles, in an attempt to knock the racer off of the course and slow his or her progress. The one to complete the course in the shortest time wins a cash prize.

*Status update: TKO: Total Knock Out has been cancelled so, there won’t be a second season.

Just deleted the series recording of program – MTV awards comments from Kevin Hart – – took the entertainment out of the show for me. Everything is so political anymore – and now I don’t want to watch anything of Kevin Hart’s anymore because he ruined things being overtly political – that is not entertainment and it simply ruined a show I did enjoy.

When will CBS show some mercy (to its viewers) and cancel that Kevin Hart-hosted gutterball, TKO: Total Knock Out?! Each week, it hemorrhages more and more viewers (losing 1.63 million viewers since it debuted six weeks ago). The network took a gamble on someone clearly “an acquired taste”, but it’s time to cut their losses and let that shrill entertainer return to the stand-up and features his paying fans enjoy, and give the rest of us (what’s left of) our hearing back!