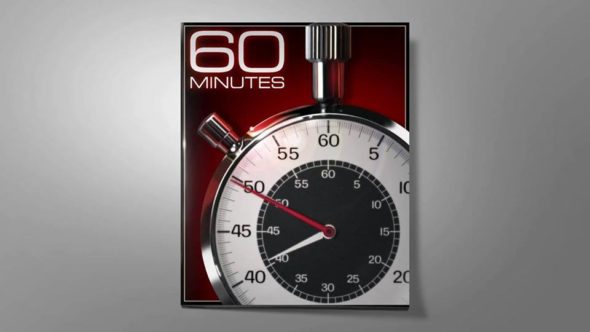 How long will the clock keep ticking? Has the 60 Minutes TV show been cancelled or renewed for a 53rd season on CBS? The television vulture is watching all the latest TV cancellation and renewal news, so this page is the place to track the status of 60 Minutes, season 53. Bookmark it, or subscribe for the latest updates. Remember, the television vulture is watching your shows. Are you?

Wondering if 60 Minutes will be cancelled or renewed for season 53 probably isn’t the best use of my time. This venerable CBS TV series remains a Sunday night staple and I’m sure it will be renewed. Still, networks use the ratings beyond cancellation and renewal decisions. They also depend on them to help determine when a show could use a tweak here or there. For now, I’ll keep an eye on the Nielsen ratings and update this page with breaking developments. Subscribe for free updates on any 60 Minutes cancellation and renewal news.

What do you think? Are you glad that the 60 Minutes TV show has been renewed for season 53? How would you feel if CBS had cancelled this TV show, instead?

i will be happy you guys should be canceled the show

Getting tired of your re-runs which are masked as follow ups
Fire up with new content please !

Thank God you have renewed 60 min!!!
It is the best thing on CBS!!!
We hope 9.6 million Americans are enough to keep it going!!! It is a content rich education that is trustworthy when much of TV is not!!!
Thank you
Pam Chamblin

Look forward to 60 minutes all week.no way should this amazing, informative, award winning show be cancelled!! If so i will never watch CBS AGAIN!

Cancel it. I have been watching for decades, it has become so biased and politicized I can barely make it through the stories.

I can not wait to watch it every week. One of my very favorite shows.

I would be heartbroken if 60minutes canceled their show. I’ve been watching since Scott Pelley started on 60minutes. Scott, Bill and Lesley are my favorite Journalists. Elaine

Have watched for years, faithfully, but growing so tired of repeats, not just once but 3 times ie Raptors training. So disappointing.