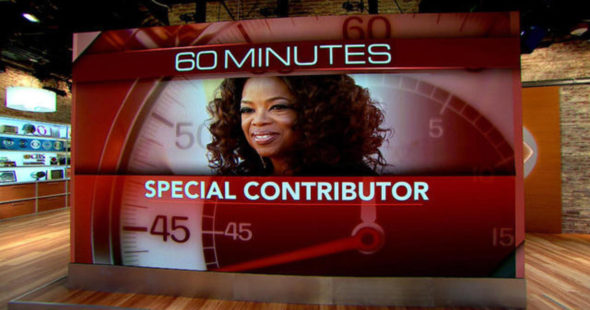 Is the clock still ticking? Has the 60 Minutes TV show been cancelled or renewed for a 51st season on CBS? The television vulture is watching all the latest TV cancellation and renewal news, so this page is the place to track the status of 60 Minutes, season 51. Bookmark it, or subscribe for the latest updates. Remember, the television vulture is watching your shows. Are you?

Wondering if 60 Minutes will be cancelled or renewed for season 51 seems a bit silly. This venerable CBS TV series remains a Sunday night staple. Still, networks use the ratings beyond cancellation and renewal decisions. They also depend on them to help determine when a show could use some retooling. I’ll keep an eye on the Nielsen ratings and update this page with breaking developments. Subscribe for free updates on any 60 Minutes cancellation and renewal news.

What do you think? Are you glad that the 60 Minutes TV show has been renewed for a 51st season? How would you feel if CBS had cancelled this TV show, instead?

I look forward to watching this program every Sunday night

I look forward to this program every Sunday night.

I love 60 Minutes – I have watched it for years