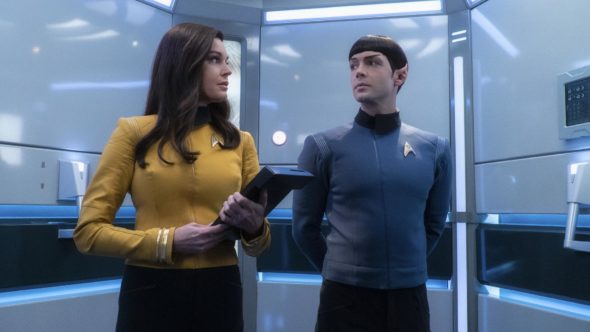 CBS All Access has given Star Trek fans a taste of the future. Today, the streaming service released a trailer for the upcoming season of Star Trek: Discovery. In addition, CBSAA started releasing the second season of the Star Trek: Short Treks series. The episodes of the latter are comprised of stand-alone stories that run about 10-15 minutes. The first episode of season two, which was unveiled today, revolves around “Ensign Spock’s (Ethan Peck) first day aboard the U.S.S. Enterprise, which doesn’t go as planned when he and Number One (Rebecca Romijn) are unexpectedly stuck together in a turbo lift.” Five additional episodes will be released the second Tuesday of each month with the next installment being released next Thursday, October 10th.

Here’s the press release, as well as a couple of video teasers:

After making the jump in the second season finale, season three of STAR TREK: DISCOVERY finds the U.S.S. Discovery crew dropping out of the wormhole and into an unknown future far from the home they once knew. Now living in a time filled with uncertainty, the U.S.S. Discovery crew, along with the help of some new friends, must together fight to regain a hopeful future. Season three of STAR TREK: DISCOVERY is set to premiere in 2020 exclusively on CBS All Access in the U.S.

During the panel, executive producer Alex Kurtzman also surprised audience members when he announced that the next installments of STAR TREK: SHORT TREKS will begin rolling out today, with the first new short “Q&A” available to stream now on CBS All Access. Written by Michael Chabon and directed by Mark Pellington, “Q&A” follows Ensign Spock’s (Ethan Peck) first day aboard the U.S.S. Enterprise, which doesn’t go as planned when he and Number One (Rebecca Romijn) are unexpectedly stuck together in a turbo lift.

STAR TREK: SHORT TREKS are approximately 10-15 minute stand-alone short stories that allow fans to dive deeper into the key themes and characters that fit into STAR TREK: DISCOVERY and the expanding “Star Trek” universe. Following today, the five remaining new STAR TREK: SHORT TREKS will drop on CBS All Access the second Thursday of each month, starting with “The Trouble with Edward” on Thursday, Oct. 10. In the month of December, fans will be treated to a special drop of two short stories on Thursday, Dec. 12.

The full roll-out schedule for the next installments of STAR TREK: SHORT TREKS on CBS All Access is as follows:

About STAR TREK: DISCOVERY:
STAR TREK: DISCOVERY follows the voyages of Starfleet on their missions to discover new worlds and new life forms, and one Starfleet officer who must learn that to truly understand all things alien, you must first understand yourself. Seasons one and two are now available to stream on CBS All Access for subscribers in the U.S., and is distributed concurrently by CBS Studios International on Netflix in 188 countries and in Canada on Bell Media’s CTV Sci-Fi Channel and OTT service Crave. The series is produced by CBS Television Studios in association with Secret Hideout and Roddenberry Entertainment.

About CBS All Access:
CBS All Access is CBS’ direct-to-consumer digital subscription video on-demand and live streaming service. CBS All Access gives subscribers the ability to watch more than 10,000 episodes on demand – spanning exclusive original series, CBS Television Network’s primetime, daytime and late night shows, plus classic TV hits – as well as the ability to stream local CBS stations live across the U.S. CBS All Access’ original series include THE GOOD FIGHT, THE TWILIGHT ZONE, STRANGE ANGEL, TELL ME A STORY, NO ACTIVITY and WHY WOMEN KILL, as well as the upcoming INTERROGATION, THE STAND and THE MAN WHO FELL TO EARTH. CBS All Access is also the exclusive domestic home to STAR TREK: DISCOVERY and the upcoming STAR TREK: LOWER DECKS and STAR TREK: PICARD featuring Sir Patrick Stewart. CBS All Access also includes the ability to stream CBS Interactive’s other live channels, CBSN for 24/7 news, CBS Sports HQ for sports news and analysis, and ET Live for entertainment coverage.

The service is currently available online at CBS.com, on mobile devices via the CBS app for iOS and Android, and on Roku Players, Apple TV, Chromecast, Android TV, Xbox One, PlayStation 4, Fire TV, Samsung Smart TVs, Vizio Smartcast TVs, Amazon Prime Video Channels and Apple TV channels. Versions of CBS All Access have now launched internationally in Canada and Australia (10 All Access), with unique but similar content and pricing plans. For more details on CBS All Access, please visit https://www.cbs.com/all-access.

What do you think? Are you looking forward to watching the third season of Star Trek: Discovery on CBS All Access? Will you check out the Star Trek: Short Treks episodes?

I wish CBS would give us a date. I have been anxious for this Star Trek Discovery 3rd year to premiere. I miss the shorts to appease while we were waiting. Now it’s too late to act them out. BTW, I love Star Trek Discovery. I do agree with Russ that as a paying customer, we do need to be shown a little more respect.

Be nice to have a release date folks. A bit rude by my generation’s standards. And if you did bury it, shame on you. Lead with it so paying viewers can be respectful to the way in which we digest the human condition.
Respectfully

They should do away with swearing though as it’s not clever, especially when you know that a large part of the audience are going to be children.

i still can’t get used to the main character being called Michael though as it just doesn’t fit and smacks of somebody on the production team attempting to be “woke” yawn.

Looking forward to season three, but sounds kinda like voyager.

What I really want to see is a spin off with Pike and Spock simply called Enterprise. That would be great.

No one is watching this travesty.

Speak for yourself. I can’t WAIT for this!