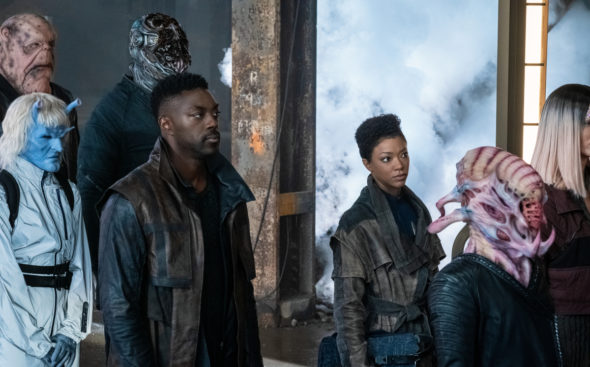 The crew of the USS Discovery has a bright future on CBS All Access. The Star Trek: Discovery TV series has been renewed for a fourth season. Production is set to begin on November 12th and season four episodes are expected to be released in Fall 2021.

Season three of the sci-fi adventure series began airing yesterday and new episodes are expected to be released weekly into early January.

Star Trek: Discovery stars Sonequa Martin-Green, Doug Jones, Anthony Rapp, Mary Wiseman, Wilson Cruz, and David Ajala. A prequel to the original Star Trek series, the drama follows the crew of the USS Discovery of the interstellar government known as the United Federation of Planets (UFP). Season three picks up after the ship’s trip into a wormhole. The crew finds themselves in the 32nd century, some 900 years into the future, far from the home they once knew. Now living in a time filled with uncertainty, the USS Discovery crew, along with the help of some new friends, must work together to restore hope to the Federation.

Here’s the renewal announcement featuring stars Martin-Green and Jones, along with Executive Producers and Co-Showrunners Alex Kurtzman and Michelle Paradise.

What do you think? Have you been enjoying the Star Trek: Discovery TV series? Do you plan to watch the fourth season on CBS All Access?

Worst star trek ever. It is an insult to the memory of a good series.

One of the things that made Star Trek characters so memorable was not just their vulnerability but their sense of humor, loyalty and camaraderie. What’s different with Star Trek Discovery series is the serious lack of humor. I wish this Director would add a bit more humanity to the characters by letting them smile a bit more, say funny things from time to time or simply joke a bit more to display their comradeship.

Omg, I am so pleased with this show. I feel like this series has breathed new life into the world of star trek! Can’t wait for season 4!!

Brilliant series, great characters and well acted. The tension, plots and set design are great and believable. An entertaining series and well with the fourth series and beyond. Having been watching since Kirk and Spock in the 1960, Gene I am sure would approve. Thank you.

I’m thrilled to watch the inventive story line and depth of character acting it is wonderful. I t had gotten a inbound 75 Syfi fan since childhood. This show has shown what a world can become at peace. It teaches so many lessons.

So glad to know there is a season 4 and maybe more.

Really disappointed that kurtzman was allowed to continue destroying this beloved franchise. which means we will not see a decent star trek for few more years.

So hard to stomach the first two seasons. Hoping season 3 will redeem the show now that all the licenses are under one roof. Its basically Gene Roddenberry’s Andromeda now, but I liked that and if they are going to plagiarize another show at least its another Roddenberry property.
I do find it interesting that after only 1 episode they get a renewal when other shows that have run entire seasons and doing well get canned.

Ditto. Very happy about a series four Another great set of characters with a solid story. Can’t wait.

I enjoy it very much and have begun to see Season 3. I’d love to see a season 4, as well. It gives me hope for the future, despite all odds…

I am glad that CBS’s renewal Star Trek Discover will become back for the 4 seasons.