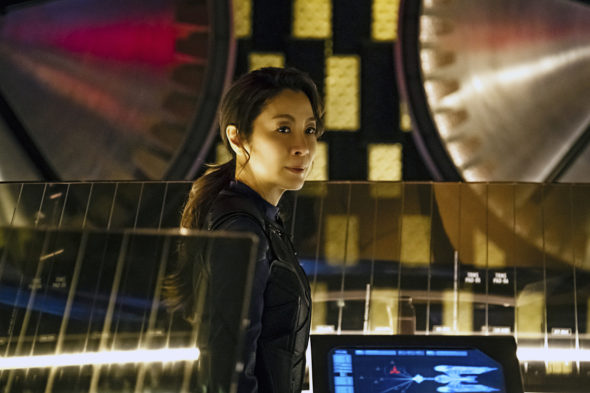 Will this series go boldly on? Is the Star Trek: Discovery TV show cancelled or renewed for a second season on CBS All Access? The television vulture is watching all the latest TV cancellation and renewal news, so this page is the place to track the status of Star Trek: Discovery, season two. Bookmark it, or subscribe for the latest updates. Remember, the television vulture is watching your shows. Are you?

Because they are trying to build up their programming slate and attract paying subscribers, I expect CBS All Access will renew Star Trek: Discovery for season two. Granted, I make that prediction with little else to go on but my hungry, hungry gut. Well, that and the fact that the Star Trek franchise is a lucrative one, and I think this is the kind of show that will convince viewers to purchase a subscription. I’ll keep an eye on things though and update this page with any breaking developments. Subscribe for free updates on any Star Trek: Discovery cancellation or renewal news. For now, I will seek my supper somewhere else.

What do you think? Did you expect the Star Trek: Discovery TV show to be renewed for a second season? How would you feel if CBS All Access had cancelled this TV series, instead?

A few years ago Roddenberry’s son was working on a series based on the pilot ” The Questor Tapes,” one of his father’s many creations. Roddenberry decided to include an android who wanted to be more human on STTNG, hence Data. I wish they would make that a reality. Also a series based on Asimov’s Foundation series. But Star Trek Discovery is a abomination. Watching paint dry is more entertaining.

Sorry for the ones that liked it, but from what I can find out, it was cancelled due to high costs and low ratings. What the heck did they expect with where they put it and the horrible acting and ship designs?

Best sci fi show for me at this moment – The Expanse. Better than Star Trek for sure.

I’m expecting discovery to be canceled terrible show , that and it deserves to get pirated as well .

honestly it feels like someone brought in a script and some hack executive decided to slap the star trek label on it hoping it would make more money. Could be a good show if they would take out everything star trek and let it stand on it’s own.

Awful show. Boring, dark pseudo-drama with uninteresting, unengaging characters that doesn’t feel like Star Trek, though it does have plenty of Trek ‘easter eggs’ in the form of terminology, tech & aliens (in name only).

Can they have made a more horrible Star Trek? I thought JJTrek was bad, but this is even worse. Many of us remember Star Trek V and it setting of the bar of bad. It even beat Battlefield Earth for bad for crying out loud. STD (Yeah, feels like I need a quick shot too.) is just absolute garbage. Leftist liberal ideologies throughout, Klingons that are supposed to represent Trump supporters, I mean Trek has always commented on real world events, but this is going way too far. I now understand why all of the Trek alums are supporting Seth… Read more »