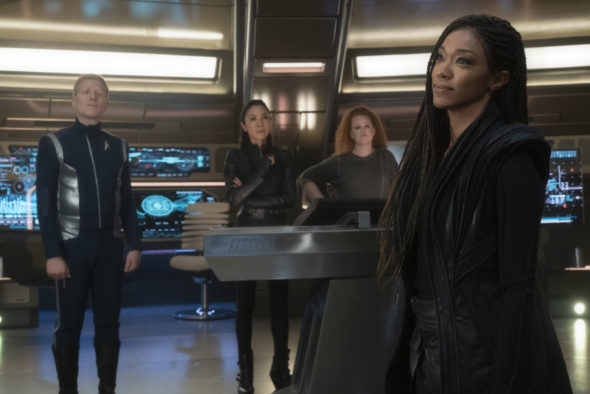 What does the future hold for our heroes? Has the Star Trek: Discovery TV show been cancelled or renewed for a fourth season on CBS All Access? The television vulture is watching all the latest cancellation and renewal news, so this page is the place to track the status of Star Trek: Discovery, season four. Bookmark it, or subscribe for the latest updates. Remember, the television vulture is watching your shows. Are you?

Streaming on the CBS All Access subscription service, the Star Trek: Discovery TV show stars Sonequa Martin-Green, Doug Jones, Anthony Rapp, Mary Wiseman, Wilson Cruz, and David Ajala. A prequel to the original Star Trek series, the drama follows the crew of the USS Discovery of the interstellar government known as the United Federation of Planets (UFP). Season three picks up after the ship’s trip into a wormhole. The crew finds themselves in the 32nd century, some 900 years into the future, far from the home they once knew. Now living in a time filled with uncertainty, the USS Discovery crew, along with the help of some new friends, must work together to restore hope to the Federation.

Unless they decide to publicize viewership, it is typically difficult to predict whether CBS All Access would cancel or renew Star Trek: Discovery. That being said, it’s no secret that the streaming service is making a push to produce more Star Trek content in order to attract and keep subscribers. Though Discovery has not been officially renewed for a fourth season, word is that the writers and producers have been working on fourth season scripts and there are plans to into production (safely) by the end of 2020. I’ll keep my ears open and an eye out for news, and will update this page with breaking developments. Subscribe for free alerts on Star Trek: Discovery cancellation or renewal news.

10/17/20 update: Star Trek: Discovery has been renewed for a fourth season on CBS All Access.

What do you think? Are you glad that the Star Trek: Discovery TV show has been renewed for a fourth season? How would you feel if CBS All Access had cancelled this TV series, instead?

We are eagerly awaiting season 4 of Star Trek discovery.

So many things wrong with S3, that last episode alone you could talk for ages about how bad it was. One thing, all of the Federation ships, (which don’t forget had 900 years more tech on them) firing on Discovery and still they couldn’t destroy it? I mean come on. Do the writers think we really are that stupid.

Really. Kick a 1940’s car as hard as you can, you will break your ankle. Kick a car now, the car part will fall apart. Not everything old is useless. Oh I could go on. The pyramids…

This show is as big of a dumpster fire as I have ever seen. I gave it a shot, I really did but the pandering and identity politics took centre stage instead of good story telling so I tuned out before season one was over and judging from the season 2 and 3 reviews I save time and money. S.T.D, the definitely got the name right. I’m also convinced that the studio purposely created S.T.D to take a giant dump on the fans because most of us are male.

A hero who was upbrought by Vulcans can not stop crying on every single Episode. Making a face like she ate a bug everytime something unexpected comes up, a cadet, who has no leader experience at all, who is loud, can’t stop jumping around or talking like a teenager in puperty, who was told by the acting captain to hide behind the bar to be safe because a bar fight was going to break out, is made first officer and acting captain? A ships crew acting like they just got off a Oprah TV Show were each of them won… Read more »

I hope to God that they cancel discovery. I stopped watching it In its second season and have no desire to start that up again. Cancel it and spend the money on something better.

I really liked the first season. The second season had a pretty good story but WTF is up with Michael crying every episode?? And this season everybody and everything is so “touchy feely” it really is boring after the first 10 times. And one last thing, I’m not homophobic but does HALF the crew have to be gay (that we know of )? It’s like this whole season has been written by a lesbian chick on her period. Yeah I said it and go to hell if you don’t like it. I thought Star Trek was supposed to be about… Read more »

Star Trek Discovery in my opinion is the best of the best of all of Star Trek series. I look forward to each and every episode and would be seriously disappointed if it were ever cancelled. I only hope that the majority share this opinion and becomes concenses that leads to further seasons.

I watched the first season on regular cbs and very much liked it. I was very disappointed to find out I have to pay for cbs all access to watch season two and three. I would like to see cbs release the second season after making their money for a year or two , to regular cable watchers. If not I can’t watch any other season , so if a fourth season gets cancelled it won’t hurt my feelings!

This series is awesome
Love the cast and story lines

I totally agree. It has kept Star Trek alive and only hope it continues to do so.

If you mean raping a corpse by “keeping it alive”, I agree. But not even me as a gay man can stand so much ignorance, dumb writing and annoying characters. After 3 seasons I don’t care about a single character on the show, even the ones that seemed promising at the beginning, turned out to be horrible psycho freaks. Not one of them would make it onto the crew of a spaceship in reality. I wouldn’t care if it was some SJW man hating **** show, but instead they put the STAR TREK label on it, a show that used… Read more »