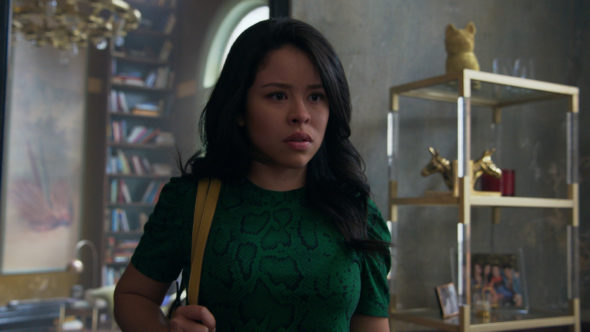 What new drama will follow the sisters in the third season of the Good Trouble TV show on Freeform? As we all know, the Nielsen ratings typically play a big role in determining whether a TV show like Good Trouble is cancelled or renewed for season four. Unfortunately, most of us do not live in Nielsen households. Because many viewers feel frustrated when their viewing habits and opinions aren’t considered, we invite you to rate all of the third season episodes of Good Trouble here.  *Status Update Below.

A Freeform drama, Good Trouble stars Maia Mitchell, Cierra Ramirez, Emma Hunton, Sherry Cola, Tommy Martinez, Zuri Adele, Josh Pence, and Beau Mirchoff. The story centers on Callie (Mitchell) and Mariana (Ramirez) from The Fosters series as the sisters spread their wings and establish themselves as young adults in Los Angeles. Season three picks up as Callie moves back into the Coterie, Mariana feels torn between Raj (Dhruv Udayh) and Evan (TJ Linnard), Malika (Adele) prepares for her hearing after breaking Judge Wilson’s (Roger Bart) restraining order, Davia (Hunton) and Dennis (Pence) explore the future of their relationship, Gael (Martinez) looks to get back to his true passion, Alice (Cola) takes her comedy to the next level, and Jamie (Mirchoff) wonders if he can ever forgive Callie for betraying him.

What do you think? Which season three episodes of the Good Trouble TV series do you rate as wonderful, terrible, or somewhere between? Do you think that Good Trouble should be cancelled or renewed for a fourth season on Freeform? Don’t forget to vote, and share your thoughts, below.

*9/9/21 update: Good Trouble has been renewed for a fourth season on Freeform.