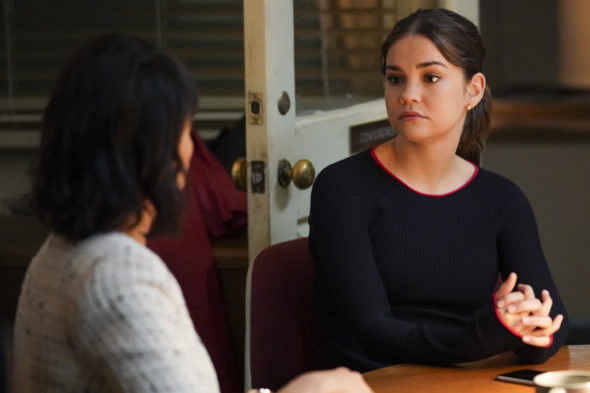 How long will Callie and Mariana’s LA adventure continue?  Has the Good Trouble TV show been cancelled or renewed for a fourth season on Freeform? The television vulture is watching all the latest cancellation and renewal news, so this page is the place to track the status of Good Trouble, season four. Bookmark it, or subscribe for the latest updates. Remember, the television vulture is watching your shows. Are you?

Airing on the Freeform cable channel, Good Trouble stars Maia Mitchell, Cierra Ramirez, Emma Hunton, Sherry Cola, Tommy Martinez, Zuri Adele, Josh Pence, and Beau Mirchoff. The story centers on Callie (Mitchell) and Mariana (Ramirez) from The Fosters series as the sisters spread their wings and establish themselves as young adults in Los Angeles. Season three picks up as Callie moves back into the Coterie, Mariana feels torn between Raj (Dhruv Udayh) and Evan (TJ Linnard), Malika (Adele) prepares for her hearing after breaking Judge Wilson’s (Roger Bart) restraining order, Davia (Hunton) and Dennis (Pence) explore the future of their relationship, Gael (Martinez) looks to get back to his true passion, Alice (Cola) takes her comedy to the next level, and Jamie (Mirchoff) wonders if he can ever forgive Callie for betraying him.

The third season of Good Trouble averaged a 0.06 rating in the 18-49 demographic and 168,000 viewers. Compared to season two, that’s down by 34% in the demo and down by 32% in viewership. Find out how Good Trouble stacks up against other Freeform TV shows.

Will Freeform cancel or renew Good Trouble for season four? The show has been a middle-of-the-road performer for the channel so, I think it will likely be renewed but, I also wouldn’t be overly surprised if it were cancelled either. I’ll update this page with breaking developments. Subscribe for free alerts on Good Trouble cancellation or renewal news.

9/9/21 update: Good Trouble has been renewed for a fourth season on Freeform.

What do you think? Are you glad that the Good Trouble TV show has been renewed for a fourth season? How would you feel if Freeform had cancelled this TV series, instead?

Yes good trouble will be renewed for season 4

season 1 and 2 were awesome but like its predecessor the fosters it needs to end getting boring but make sure they still tie loose ends. the fosters season 1-4 were great but when season 5 came on most of the episodes were boring imo

I would be so sad if this show ended at season 3! I absolutely love this show, the diversity, the politics, the characters…. I’ve been a fan for a long time now and hope to continue watching!!!

I would absolutely love to see this show keep going! However, if they do decide to end it, I hope they at least tie up loose ends in the show!

I actually got into this show from a co-worker. It is really good and definitely a page turner! I am on season 2 but researched why season 4 has not already been renewed! Please renew and do not cancel! It has the potential to keep going and growing! I have already spred the word to my family and friends about this show!!

Loving Dennis and Davis, need another season to get them together

Impatiently waiting for season four.. this is an absolutely amazing show. This show is real life,these are our friends,our family,our struggles,our experiences,our hearts.. pls renew.

I actually believe that Good Trouble is a pretty positive show and I think this show is needed now more than ever! Having left LA after being for 20 yrs was a weird step that was forced in my life at the time.. Another strange force is the fact that out of nowhere now I have to go back… Seeing this show has given me positive reinforcement about wanting to go back. I say that bc so much of what this show entails is very real and prevalent in the heart of what Hollywood or “LA” is. The managers who… Read more »

Adoptions, and Apps, and removing cops from schools…don’t leave us hanging.

I would love for this show to continue. At least a season 4 and if you decide you don’t want to do it anymore then wrap up the story, don’t leave people hanging !

Please don’t cancel this show! It’s my favorite ever series. I really want to see what happens with Dennis,Davis, Callie, and Gael!