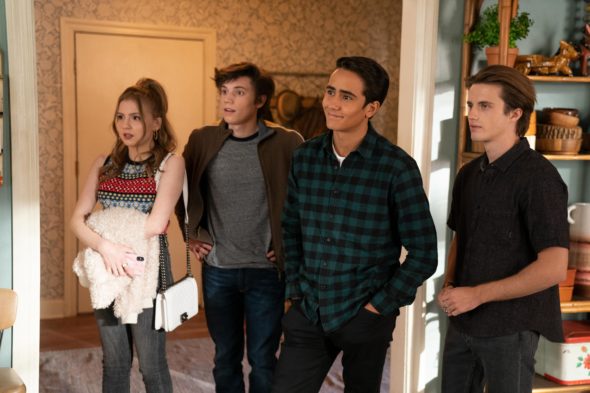 What will happen between Victor and Benji? Has the Love, Victor TV show been cancelled or renewed for a third season on Hulu? The television vulture is watching all the latest cancellation and renewal news, so this page is the place to track the status of Love, Victor, season three. Bookmark it, or subscribe for the latest updates. Remember, the television vulture is watching your shows. Are you?

Streaming on the Hulu subscription service, the Love, Victor TV show takes place in the same world as the Love, Simon feature film and stars Michael Cimino, Rachel Hilson, Anthony Turpel, Bebe Wood, Mason Gooding, George Sear, Isabella Ferreira, Mateo Fernandez, James Martinez, and Ana Ortiz. As the series begins, the Salazar family — blue-collar father Armando (Martinez), mother Isabel (Ortiz), Victor (Cimino), little brother Adrian (Fernandez), and younger sister Pilar (Ferreira) — has relocated to Atlanta from Texas. Despite feeling out of place at high school, Victor makes friends with classmates like his awkward neighbor, Felix Westen (Turpel), quick-witted Mia Brooks (Hilson), and media-obsessed Lake Meriwether (Wood). On a journey of self-discovery, Victor faces challenges at home, adjusts to a new city, and struggles with his sexual orientation. Season two finds a newly out of the closet Victor entering his junior year at Creekwood High. But being out brings with it new challenges, as Victor faces a family struggling with his revelation, a heartbroken ex-girlfriend in Mia, and the difficulties of being an openly gay star athlete — all while navigating the excitement of his relationship with Benji (Sear).

Unless they decide to publicize viewership, it is difficult to predict whether Hulu will cancel or renew Love, Victor for season three. Since Hulu isn’t ad-supported, it can take a chance on series it believes in, but sooner or later it comes down to production costs, versus viewership numbers. I think this show will be renewed for a third (and possibly final) season. I’ll keep my ears open and an eye out for news and will update this page with breaking developments. Subscribe for free alerts on Love, Victor cancellation or renewal news.

What do you think? Are you glad that the Love, Victor TV show has been renewed for a third season on Hulu? Are you sorry to know there won’t be a fourth season?