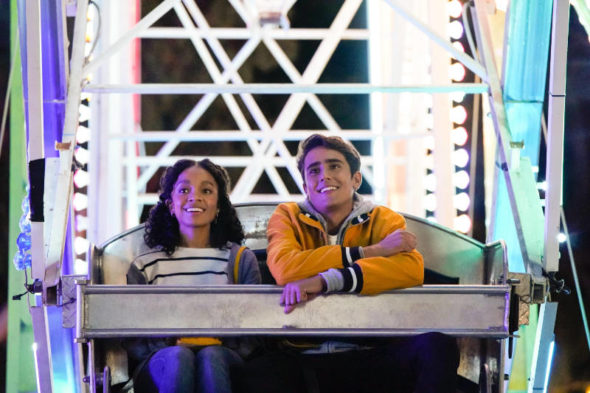 Set in the same world as the Love, Simon feature film, Love, Victor follows Victor (Michael Cimino), a “new student at Creekwood High School on his own journey of self-discovery, facing challenges at home, adjusting to a new city, and struggling with his sexual orientation. When it all seems too much, he reaches out to Simon to help him navigate the ups and downs of high school.” The first season cast also includes Rachel Naomi Hilson, Ana Ortiz, Anthony Turpel, George Sear, Mason Gooding, Bebe Wood, Isabella Ferreira, and Mateo Fernandez.

Here’s the Hulu announcement about the renewal:

Following a successful first season, Love, Victor returns to Hulu for a 10-episode second season. Ranking as the #1 most-watched Drama on Hulu during its premiere week this past June, Love, Victor is set in the world of the groundbreaking 2018 film LOVE, SIMON which was inspired by Becky Albertalli’s acclaimed novel, “Simon vs. the Homo Sapiens Agenda.” The first season followed Victor, a new student at Creekwood High School, on his own journey of self-discovery, facing challenges at home, adjusting to a new city and exploring his sexual orientation. As Victor and his friends mature, so will season two, promising to build on these themes of sexual identity, acceptance and navigating the odyssey we all know as high school.

What do you think? Have you seen the Love, Victor TV series? Will you watch season two on Hulu?

A quite realistic show on a delicate subject, not at all often touched upon in primetime or mainstream TV. A Second Season is definitely a must – for the Channell as well as for the public!

Absolutely will watch Season 2! Kudos to Hulu Productions for bringing it back. Definitely a relevant subject matter in today’s more progessive society produced in an enjoyable format.