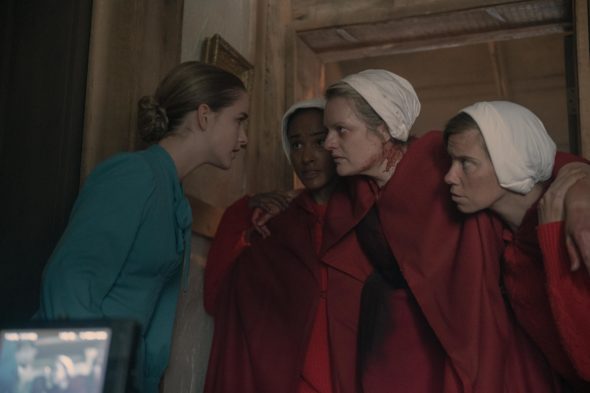 Is this story coming to an end? Has The Handmaid’s Tale TV show been cancelled or renewed for a fifth season on Hulu? The television vulture is watching all the latest cancellation and renewal news, so this page is the place to track the status of The Handmaid’s Tale, season five. Bookmark it, or subscribe for the latest updates. Remember, the television vulture is watching your shows. Are you?

Streaming on the Hulu subscription service, The Handmaid’s Tale stars Elisabeth Moss, Joseph Fiennes, Yvonne Strahovski, Samira Wiley, Alexis Bledel, Ann Dowd, Max Minghella, Madeline Brewer, O-T Fagbenle, Amanda Brugel, Bradley Whitford, and Sam Jaeger. The dystopian tale tells the story of life under the totalitarian government of Gilead, a totalitarian society in what was formerly the United States. Offred (Moss), one of the few fertile women known as Handmaids in the oppressive Republic of Gilead, struggles to survive as a reproductive surrogate for a powerful Commander and his resentful wife. In season four, Offred strikes back against Gilead as a fierce rebel leader, but the risks she takes bring unexpected and dangerous new challenges. Her quest for justice and revenge threatens to consume her and destroy her most cherished relationships.

We don’t have to wonder about this show’s fate since Hulu has already renewed The Handmaid’s Tale for season five. Will that be the end? I’ll keep my ears open and an eye out for news, and will update this page with breaking developments. Subscribe for free alerts on The Handmaid’s Tale cancellation or renewal news.

What do you think? Are you glad that The Handmaid’s Tale TV show has been renewed for a fifth season? Should season five be the end for this Hulu series?

Do you also have a site which shows Tv Series That have been released on DVD, I AM IN Australia, and the Tv series are in thee main not released here on Free toAir Television, and those such as Stan, Netflixand others are subscription only, which are unable to be afforded by Aged Pensioners like myself.