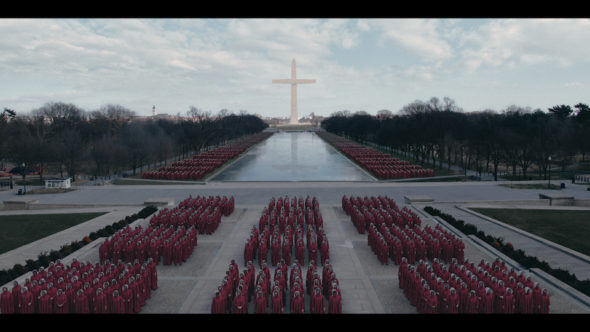 Is Offred finally free to be June Osborne again? Has The Handmaid’s Tale TV show been cancelled or renewed for a fourth season on Hulu? The television vulture is watching all the latest TV cancellation and renewal news, so this page is the place to track the status of The Handmaid’s Tale, season four. Bookmark it, or subscribe for the latest updates. Remember, the television vulture is watching your shows. Are you?

A Hulu drama based on the Margaret Atwood novel, The Handmaid’s Tale stars Elizabeth Moss, Joseph Fiennes, Yvonne Strahovski, Samira Wiley, Alexis Bledel, Max Minghella, Madeline Brewer, Ann Dowd, and O-T Fagbenle, with Christopher Meloni and Elizabeth Reaser in guest starring roles this season. The dystopian tale tells the story of life under the totalitarian government of Gilead. The catastrophic state of the environment has devastated the birth rate, so fertile women are enslaved in the former US. The third season brings with it a new prayer: “Blessed by the fight.” It centers on June’s (Moss) resistance and her odds-defying fight to strike back, at a time when all must take a stand.

Unless they decide to publicize viewership statistics, it is difficult to predict whether Hulu will cancel or renew The Handmaid’s Tale for season four. The season two and season three renewals came within a couple of weeks of the first and second season premieres (respectively). If another renewal is coming, I expect to see it within a month or so. And flying blind, I do not expect this show to be cancelled or otherwise end without warning. This was arguably Hulu’s first really big original series. It has brought them much acclaim, so I think they would want to promote a final season as such. Since this is speculation, I’ll keep an eye on the trades and press releases and update this page with any developments. Subscribe for free alerts on The Handmaid’s Tale cancellation and renewal news.

7/26/19 update: Hulu has renewed The Handmaid’s Tale TV show for a fourth season.

What do you think? Are you glad that The Handmaid’s Tale TV series has been renewed for a fourth season? How would you feel if Hulu had cancelled this TV show, instead?

I absolutely love this show. Season 3 was waaaaay too short so I am anxiously waiting for season 4. It’s an excellent show and should continue.

I find this to be the most well-made series on any network. I’m looking forward to Hulu renewing it until June’s story is completely told!

There has to be a season 4,. this show is one of the best series I have seen. Please let there be a number 4! Such a great cast… Elizabeth Moss is amazing…such a great actress.
Love it. !

Season 4 of Handmaid’s Tale IS HAPPENING!

Do not cancel. I’ll do the same and cancel my membership