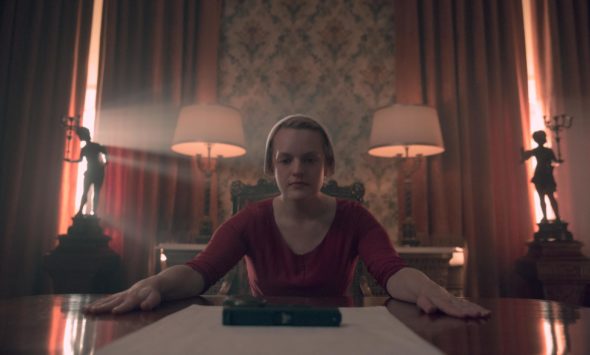 The story of The Handmaid’s Tale is far from over. Today, Hulu announced that the dystopian drama series has been given an early fifth season renewal, ahead of the fourth season’s premiere.

The fourth season of The Handmaid’s Tale will debut at some point in 2021 and will have 10 episodes once again. In season four, June (Moss) strikes back against Gilead as a fierce rebel leader, but the risks she takes bring unexpected and dangerous new challenges. Her quest for justice and revenge threatens to consume her and destroy her most cherished relationships.

What do you think? Do you like watching The Handmaid’s Tale TV show on Hulu? Are you looking forward to the fourth and fifth seasons?

I did not like season 4 ending bc it turned june into the villain instead of the heroin. It would have been far better to have natural justice with gilead killing their own and serena having her baby taken away and being turned into a handmaid. Accountabilty and karma was a better script to play out! We are tired of real life where trumpians continue to reign and ruin without their own turning on them. The only way to save the plot is to have June wake up from her nightmere and reconsider a better way to seek justice that… Read more »

I TOTALLY LOVE THIS SHOW ELIZABETH MOSS IS EXACTLY ACTRESS! I HOPE THE SHOW CAN LAST. I WILL BE SO MAD IF THEY TAKE IT OFF AIR!

I love the Handmaids Tale. Wish there were more then 10 episodes in a season.