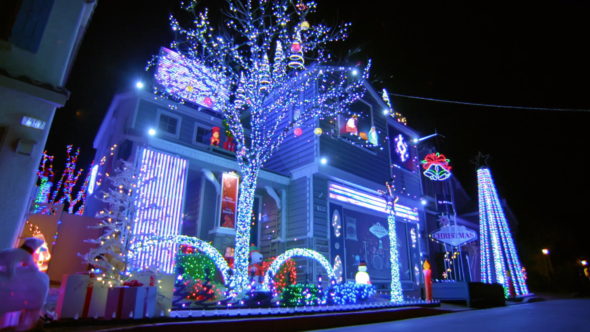 ABC is keeping the holiday lights on. The eighth season of The Great Christmas Light Fight just began airing this week but the filming on the ninth season is already underway.

The Great Christmas Light Fight follows two judges — lifestyle expert Carter Oosterhouse and interior designer Taniya Nayak — as they assess the creativity and decorating skills of everyday people (albeit ones with an abundance of holiday cheer). Over the course of six episodes (filmed in 2019), the duo considers those homes with occupants who take yuletide adornment to a whole new level. In the end, the winners are awarded a cash prize and the coveted “Light Fight” trophy.

Airing on Wednesday nights, the eighth season of The Great Christmas Light Fight currently averages a 0.70 rating in the 18-49 demographic and 4.02 million viewers. Compared to season seven, that’s up by 4% in the demo and up by 11% in viewership.

In an interview with TV Insider, Nayak was asked about the challenges of filming the upcoming ninth season.

Question: Given what’s going on with COVID-19, let’s start with Season 9, which you’re shooting right now, and which premieres next year. I’m sure it’s very different than what you’ve been used to.

Nayak: It’s been an interesting experience for both Carter and I. It’s so wild to [watch the current season] and see the big crowds and the hugging. We’ve been filming now with strict guidelines. The energy is still there, though; we just don’t have the big crowds we used to have.

Question: Do you find the $50,000 matters even more to the families this year?

Nayak: Every year the money was always nice [to get], but it was never a driving factor for anybody because they decorate anyway. Given the pandemic and hard times we’re facing, it will probably be a little bit sweeter to have that money. But these guys are doing it for a cash prize or no cash prize. They do it because they love doing it for themselves and their communities.

What do you think? Do you enjoy The Great Christmas Light Fight TV show every year? Will you be watching season nine in 2021?

I love this show so much I look forward to it every year!! I also love the fact that it aired on my birthday so that was a good birthday present for me to see can going on the show and I hope all the fans keep on to decorating so we can see their beautiful life and decorations and their heads have making it❤

I enjoy it every year and I will watch it in 2021. I remember to put it in my DVR to remember to watch it.

I remember one year the black woman did all the Christmas decorations all by her self. I’m glad The Great Christmas Light Fight judge gave her credit for it.

I love this show. I didn’t know it was back on,until I found it flipping through the channels. Wish it was advertised. Pleasantly surprised.

This is my favorite holiday tv show ♥️❤️