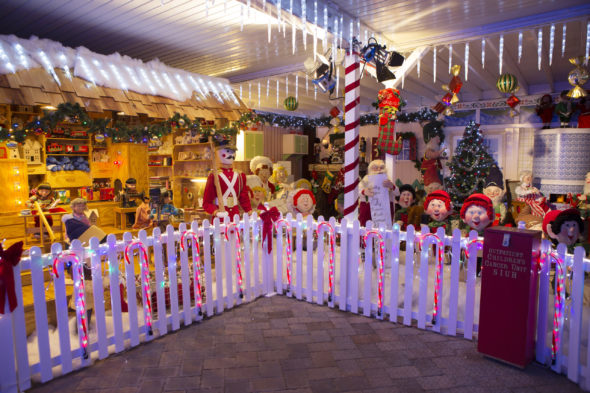 The Great Christmas Light Fight is returning for an eighth season on ABC and a premiere date has now been set.  Once again, families will battle it out to see who has the winning holiday decorations.

ABC revealed more about the return of the series and other holiday programming in a press release.

ABC today announced its slate of holiday programming, inviting families everywhere to cozy up on the couch under a warm blanket and get into the yuletide spirit with beloved classics and new favorites.

Additional highlights include a special fifth anniversary of the Thanksgiving evening staple The Wonderful World of Disney: Magical Holiday Celebration; a reimagined Disney Parks Magical Christmas Day Celebration; CMA Country Christmas from Nashville; a bright new season of The Great Christmas Light Fight, which received a new season order as well; new holiday-themed episodes of ABC comedies and “General Hospital”; and the network broadcast premiere of “The Greatest Showman.” Top it all off with a sprinkling of classic holiday favorites and settle in, ABC is about to get fa-la-la-mazing.

“The Great Christmas Light Fight” – Season Premiere – It’s beginning to look a lot like Christmas as ABC’s tree-mendously popular decorating competition series, “The Great Christmas Light Fight,” takes over Wednesdays in December as it returns for its eighth season with back-to-back episodes. America’s brightest houses bring joy to the world with the help of celebrity judges – lifestyle expert Carter Oosterhouse and famed interior designer Taniya Nayak. All isn’t always calm, but all is definitely bright as the Christmas classic takes viewers across the country to the most elaborate and awe-inspiring holiday displays in the nation. This holiday season, we will once again see four fantastic families face off in each one-hour episode and compete to win $50,000 should they “sleigh” the competition. Taking Christmas decorating to another level, the Heavyweights special will return for its third year featuring a first-ever parade of one-of-a-kind sparkling floats and a mile-long drive-through with over a million synchronized lights, to name a few, that viewers will never forget. “The Great Christmas Light Fight,” which also received a season nine pickup, is produced by Fremantle. Brady Connell, Max Swedlow, Felicia Aaron White and Jennifer Mullin are executive producers for the series.

The new season of The Great Christmas Light Fight arrives on December 9th. There will be six installments once again and two episodes will air each Wednesday night until December 23rd.

*Note: The episodes were filmed in 2019, before the COVID-19 pandemic.

What do you think? Are you excited for the return of this holiday competition series?

Year of the Nurse

Just watched the episode aired on 12/16/20. As a healthcare worker, I am hopeful that this was recorded last year. If not, I am appalled to see no one wearing masks, screaming and cheering in very close proximity. My ICUs are filled with people who don’t believe in COVID.

I am saddened. When I checked to see if it was new or old, it indicates it is new.

Sincerely.
A worn out nurse.

Trevor Kimball
Admin
Reply to  Year of the Nurse

It was filmed last Christmas.

No covid safety protocols??! That is crazy.

When was this filmed? No masks? No distancing? Must have been last Christmas?

I thought the exact same thing! What were they thinking?!?!?!

No masks? People, especially the cancer survivors, could die from the disregard for medical safety. For shame!

When was this filmed? During Covid?

Why aren’t they wearing masks??

I love this show but WHY?!? must this be shown on Wednesday nights??? Nice family show and it has to be broadcast on a Wednesday aka Church night. Very disappointed.

So excited , best show ever