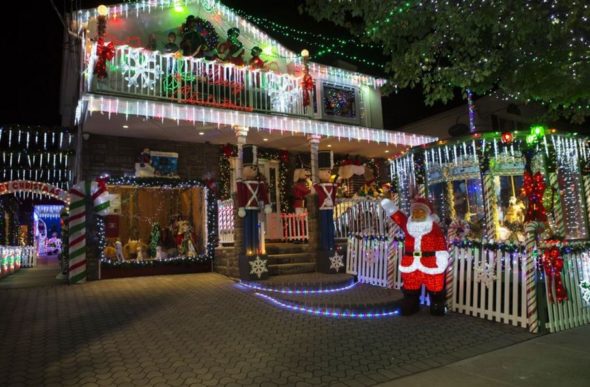 ABC is all set for the holidays. The network just announced the season seven premiere date and a season eight renewal for The Great Christmas Light Fight.

Season seven of The Great Christmas Light Fight premieres on ABC on December 2nd at 8 p.m. ET/PT. Season eight is slated to debut in 2020.

Season seven of the holiday hit will once again showcase the most extravagant and utterly spectacular Christmas displays America has to offer! In each one-hour episode, four families with dazzling household displays will compete to win $50,000 and the coveted Light Fight trophy. This season, viewers will also be treated to a second round of the special Heavyweights episode, featuring light shows so massive, they extend well beyond household frames. Additionally, peek inside featured family homes for an impressive batch of unique interior Christmas displays, as Judges Oosterhouse and Nayak lead the way in another year of over-the-top holiday cheer.

What do you think? Have you seen The Great Christmas Light Fight? Will you watch the new season?

ABSOLOUTLY, this is a feel Good Family Show, for everyone!!! Can’t wait to see at what lengths Families will do with Lights & Decoration’s to Celebrate Chrustmas!!?
Cheers for Renewing it, can’t wait to watch!

I have watched this show since the first year it was on. I love what people can do with lights and decorations. The only negative is some get too carried away and its looks messy.

I love and watch this show every year at Christmas time….. It’s definitely my favorite holiday show.

I watch it but I’ve been very disappointed every year by who gets picked to win. I think they need new judges!

Been watching every year since season 1!
It’s become our holiday tradition!♥️♥️

I like everything related to christmas but.in opinion some people are over the top