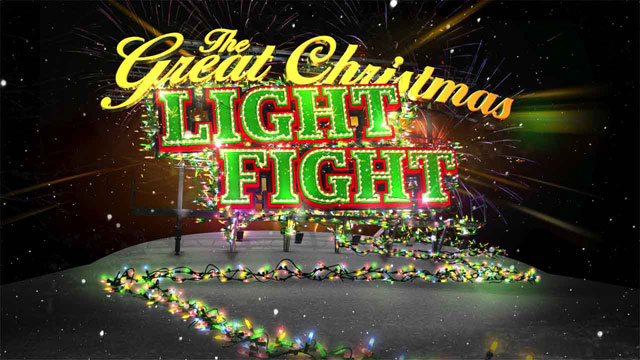 The Great Christmas Light Fight is returning for a fifth season, as previously reported by this site. Now, more has been revealed about the new season. Season five will premiere on December 5.

ABC revealed more about the upcoming season in a press release. Check that out below.

“The holidays are about to get a whole lot brighter with ABC’s immensely popular decorating competition series, The Great Christmas Light Fight, premiering MONDAY, DEC. 4 (8:00-10:00 p.m. EST). Produced by FremantleMedia North America, the hit holiday series is back for a fifth season with returning celebrity judges Carter Oosterhouse and Taniya Nayak.

Season Five of The Great Christmas Light Fight showcases the wildest and most spectacular Christmas displays in America. In each episode, four families from all around the country with over-the-top displays compete to win the coveted Light Fight trophy and a $50,000 prize, with a total of $300,000 given away for the season. Along with the incredible displays, this season also features the first-ever neighbors vs. neighbors episode, where side-by-side neighbors team up to compete against other side-by-side neighbors in a doubly epic battle of the bulbs! The series will air back-to-back episodes for three consecutive weeks: MONDAY, DEC. 4 (8:00-10:00 p.m. EST); MONDAY, DEC. 11 (8:00-10:00 p.m. EST); and MONDAY, DEC. 18 (8:00-10:00 p.m. EST).

Carter Oosterhouse’s expertise in green-building solutions and eco-friendly designs makes him one of the most relevant and sought-after lifestyle experts today. The instantly recognizable host has helmed several popular television series including TLC’s “Trading Spaces,” which he will be returning to along with the rest of the cast in 2018.

Boston-based interior designer Taniya Nayak is the creative vision behind some of the most exciting new restaurant interiors and high-end residences across the country. She has appeared on Good Morning America, HGTV and Food Network and is a regular guest on the Rachael Ray Show. New projects include New England hot spots Lower Mills Tavern, Yellow Door Taqueria and several locations of Ruth’s Chris Steakhouse, as well as a home for Boston Bruins star Patrice Bergeron and family.

Are you a fan of The Great Christmas Light Fight? Will you check out the new season? Tell us what you think.

We love this show and can’t wait to watch as a family! It’s a holiday favorite.

We can’t wait to watch again the light fights. The show is a highlight of my Christmas season. And it starts on my husband’s 35rh anniversary.

My whole Family looks forward every Season for this Show to come on. We can’t wait till December 4th.