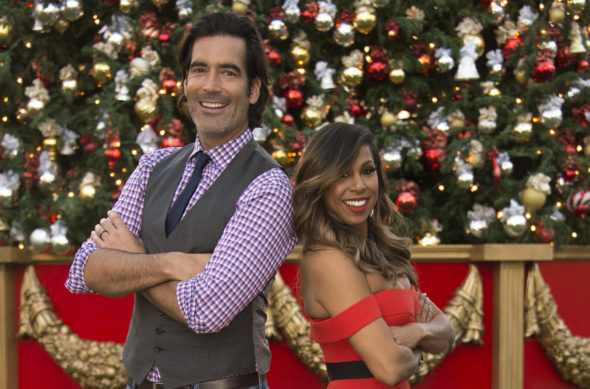 The Great Christmas Light Fight follows two judges — lifestyle expert Carter Oosterhouse and interior designer Taniya Nayak — as they assess the creativity and decorating skills of everyday people (albeit ones with an abundance of holiday cheer). Over the course of six episodes (shot in 2019), the duo considers those homes with occupants who take yuletide adornment to a whole new level. In the end, the winners are awarded a cash prize and the coveted “Light Fight” trophy.

For comparisons: Season seven of The Great Christmas Light Fight on ABC averaged a 0.67 rating in the 18-49 demographic and 3.63 million viewers.

What do you think? Do you like The Great Christmas Light Fight TV series on ABC? Should it be cancelled or renewed for a ninth season?

*12/11/20 update: The Great Christmas Light Fight has been renewed for a ninth season.

This is December 2020. I watched 15 minutes of this to determine if it was footage from 2019.
we’re in the midst of a pandemic. there are crowds of people with no masks from various different states and even hugging. and to top it off one of the contestants is a cancer patient undergoing chemotherapy whose immune system must be down! What are they thinking?

At the beginning of each episode it said “recorded prior to recent Covid-19 precautions”. They filmed this season in 2019.